A deeply religious Brazilian notary struggles in her attempts to conceive 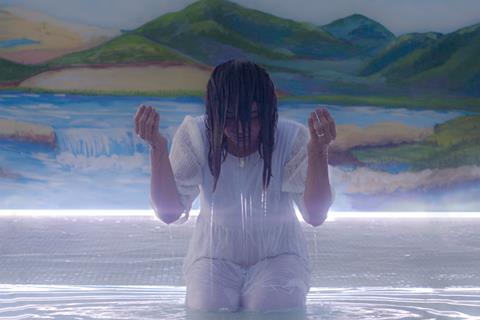 Gabriel Mascaro’s third narrative feature may present a world where security scanners detect pregnancies, dance parties pulsate with religious fervour and faith is the foundation of the state, but Divine Love is a thoughtful, intimate rumination on spirituality and sensuality dressed up in futuristic packaging. Four years after Venice prizewinner Neon Bull, the writer/director makes his Sundance debut with another intricately observed and entrancingly dreamlike film — and while this 2027-set drama often favours mood over story, it convincingly draws viewers into its exploration of religion and romance.

After its predecessor’s widespread acclaim, Divine Love should find ample berths on the festival circuit, where a welcoming audience awaits the film’s measured pace and luminous imagery. Theatrically, it might prove a touch too enigmatic and ethereal even for art-house distribution, although highlighting the feature’s Private Life-meets-The Lobster leanings — the former more overt than the latter — could help broaden its audience.

When Divine Love begins with fluorescent hues, an ‘80s-esque electro beat and bodies writhing on the dance floor, it might appear that Mascaro is returning to what he knows. Visually, that’s somewhat true and, emotionally, he again plumbs the depths of a lonely soul searching for contentment. Thematically, however, the Brazilian filmmaker takes aim at a society that demands blind adherence from its disciples yet won’t afford them the benefit of the doubt in return. He’s never forceful with his commentary on unyielding evangelism and bureaucracy, but his criticisms remain both astute and inescapable.

Co-written with producer and August Winds collaborator Rachel Daisy Ellis, first-timer Esdras Bezerra and Gabriel And The Mountain author Lucas Paraízo, the feature follows notary Joana (Dira Paes), a functionary who genuinely enjoys her job. Devoted to the Divine Love faith which has swept Brazil, she considers her role less about processing divorce paperwork and more about reconciling struggling couples. Even with a glint of sadness evident in her eyes, Paes is at her gentle yet radiant best as her character interacts with downtrodden duos at the end of their relationships. When Joana isn’t addressing the martial woes of others, her own personal life is tinged by disappointment; namely her inability to conceive with her florist husband Danilo (Julio Machado).

If falling pregnant were a mere numbers game, Divine Love’s central couple wouldn’t have a problem. Sex scenes are plentiful across the film’s first half, with Mascaro artfully capturing lovemaking in all of its dutiful, yearning, passionate and ecstatic forms. As he did with Neon Bull’s vivid visuals, cinematographer Diego García bathes much of the movie in an alluring glow — when his imagery isn’t starkly naturalistic, that is. Indeed, segueing from fluorescent-lit bursts of colour to drab office and apartment interiors helps give the feature its otherworldly feel.

With parenthood eluding them, Joana and Danilo find solace in their church, which venerates coupledom yet remains surprisingly permissive regarding carnality — as long as it’s anchored in marriage and keeps procreation as ultimate goal. From drive-in priest sessions to pop ballad hymns to raves proclaiming “god fulfils me” in vibrant lights, Mascaro has fun reimagining religious worship. They’re all flourishes that add to the film’s look and tone, but ultimately don’t have the same impact upon the story.

As Joana’s modest life crumbles, her struggles with faith — and the movie’s eventual leap of faith — would have still proven resonant in contemporary times. But Mascaro’s striking aesthetics give the film a texture and atmosphere that aligns the audience firmly with its protagonist; she’s seeking transcendence, and the movie she’s in approximates it one lustrous frame at a time.