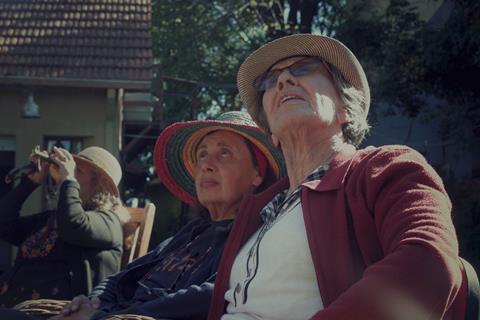 Director Natalia Labake’s family history reveals larger truths about the place of women in Argentinean society. In Dormant, she contrasts camcorder footage shot by her grandmother in the 1980s with contemporary material. Her purpose is to draw the women in her family out of the shadows and into sharper focus. The result is a thoughtful, intensely personal documentary.

Labake’s decision not to identify anyone or provide any context does make for an initially quite challenging, elusive watch. A knowledge of Argentine politics might also prove useful to better understand the importance of some individuals and their allegiances.

Labake begins with a lengthy quote from Isabel Martinez De Peron, Argentine President between 1974 and 1976. She asserts: “The woman, in her role as mother, has the sacred mission of forging the essence of nationality. In their lap rest little heads of children whose pure thoughts are coined by heavenly angels.” It sets the scene for the camcorder footage from the 1980s in which the women are defined as wives and mothers whose sacred purpose is to support their man and nourish their children.

The original footage was largely shot by Labake’s grandmother Haydee Alberto. She captures aspects of her life with lawyer, politician and Natalia’s grandfather Juan Gabriel Labake. Sometimes wobbly, poorly lit or lost in gloomy shadows, the footage idolises Juan as he makes speeches, talks politics, runs for office as a candidate of the Justicialist Party or hangs out with Carlos Menem. If the women are shown at all, they are invariably on the edges of conversations, looking after children, preparing food, touching up their make-up. There is seemingly no possibility that they could be anything other than content with their place in the great scheme of things.

More recent and polished footage finds Labake placing the focus on her sister Agustina and her aunt Bibiana. Both of them feature briefly in the earlier footage. A sleepy, lost looking “Bibi” is now resident in a care home whilst an anxious Agustina still lives at home, seeking to address her stress levels through alternative medicines and mysticism.

In many respects, the women are damaged survivors of the past. Locked out of conversations, never encouraged intellectually, they have been unable to create an indentity for themselves. “I’m angry at life,” claims Bibi. The most striking element of the film is the way that hindsight lends a poignant edge to the camcorder images of the 1980s as a glowering Agustina stares into the camera or an awkward Bibi smiles distractedly when the recorder happens to alight on her. Haydee seems to have relished her role as the “good wife” but there is even a question mark over her. At one point an elderly Juan proudly boasts: “ I have allowed her to do everything she wanted in life.” Who even knows what she really wanted or what dreams went unexplored?

A film haunted by lost souls and unfulfilled lives, Dormant briefly allows the invisible to have a bittersweet moment in the limelight.