'Down Under': Sydney Film Festival Review 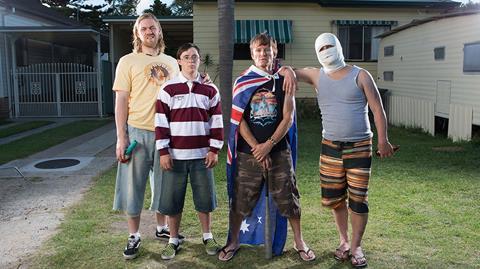 How soon is too soon when it comes to making a black comedy about the race riots that divided Australia eleven years ago? And can a subject as sensitive and potentially offensive as engrained bigotry ever garner genuine laughs? If the former is a question writer/director Abe Forsythe’s Down Under poses simply by existing, the latter receives an affirmative response courtesy of a clever script and a canny sense of comic timing.

Racism isn’t a funny subject, nor is the reality and tragedy behind Forsythe’s ambitious, satirical conversation-starter, but here, the idiocy of prejudice can be

Directing his first feature since 2003’s Ned, actor-turned-filmmaker Forsythe’s sometimes awkward, often confrontational and mostly loosely entertaining Four Lions-style examination of one of the most problematic chapters in his nation’s recent history proves both purposefully stupid and surprisingly astute.

Indeed, in a necessary move for a movie that ponders such an inflammatory situation, Down Under doesn’t seek to take sides in the conflict between Australians of Caucasian and Middle Eastern backgrounds, or point fingers at vitriol spouted, assumptions made and abhorrent behaviour flouted by both camps. Instead, it tries to highlight the futility, stupidity and absurdity of the situation. When the director cameos as a passerby, he gives voice to the feature’s primary perspective. Asked about his ethnicity by a would-be assailant, his character replies: “You need to go home and have a good, hard look at yourself.”

It’s a message carefully calculated to spark as much serious consideration as discomfort — even if the manner in which it is conveyed is just as concerned with cultivating hearty chuckles — and one likely get local and international audiences talking. On home turf, after premiering at the Sydney Film Festival, the film is set to screen in the centerpiece slot at the Melbourne International Film Festival in August, and then open in theatres later that month. Down Under’s worldwide fate is less certain, though the accessibility of its broad humour and the sadly globally recognisable nature of the xenophobic us-versus-them battle at its centre, should help counteract the cultural specificity of the content.

As is now a matter of history, in December 2005 the beachside suburb of Cronulla in the south of Sydney erupted into mob violence. Down Under sets its story in the aftermath of the bulk of the fray, with two groups prowling the area looking to either protect their territory or retaliate for previous attacks, and primed for physical altercations.

In one car, hot-headed Ocker ringleader Jason (Damon Herriman) and heavily tattooed Ned Kelly fan Ditch (Justin Rosniak) aggressively goad the unfortunately nicknamed stoner Shit Stick (Alexander England) and his cousin Evan (Chris Bunton) into searching for people of Arab descent to beat up. In another, the studious Hassim  (Lincoln Younes) only agrees to drive around with the outspoken Nick (Rahel Romahn) because his own brother is missing, with his religiously inclined uncle Ibrahim (Michael Denkha) and their beat-boxing pal D-Mac (Fayssal Bazzi) also along for the ride.

Cutting between the crews as they squabble, spout inanities, stockpile weapons, circle the streets, sing along to the likes of Natalie Imbruglia’s Torn and Limahl’s The NeverEnding Story theme, and careen towards their inevitable collision, Forsythe and his editor Drew Thompson never miss an opportunity to highlight their many similarities despite their clear ideological differences. It’s an obvious approach that mines the dumb and often bizarre depths of blind discrimination dressed up as nationalism and cultural pride, but it remains a mostly effective one. When Jason desperately searches for a kebab for his pregnant girlfriend (Harriet Dyer), and Hassim is forced to don Aussie flag boardshorts after a run-in with a meth dealer (a scene-stealing David Field at his most flamboyant) leaves him sans trousers, the movie inspires both laughterand recognition of the utter ridiculousness at its core.

That said, Down Under remains as patchy as it is provocative when it comes to branching beyond its point of focus; the film might smartly mine a difficult topic for hilarity, but it makes a few easy choices in its attempts to range beyond the stereotypes not only of modern multiculturalism, but of sexuality and disability. Thankfully, the large cast performs their profanity-laced roles with the commitment needed, with England, Bunton and Younes standouts in more sympathetic parts, and Herriman and Romahn in over-the-top mode. While often simplified, their characters are never merely caricatures.

On a technical level, the feature is apolished affair, as Hunt For The Wilderpeople cinematographer Lachlan Milne awards the suburban Sydney landscape the right balance of ordinariness and tension, and ensures the vehicles the feature spends the bulk of its time within feel like distinctive spaces. And though an impressive mid-film rotating shot that surveys the many reactions of one of the groups may be designed to draw attention, Down Under will certainly achieve that feat anyway. Racism isn’t a funny subject, nor is the reality and tragedy behind Forsythe’s ambitious, satirical conversation-starter, but here, the idiocy of prejudice can be.