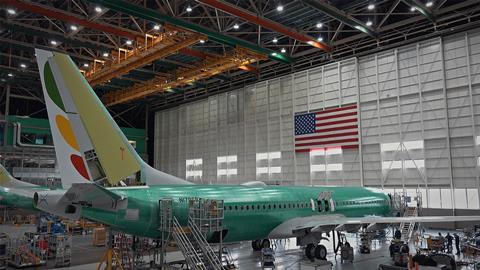 ‘Downfall: The Case Against Boeing’

Most potential audiences will be aware of the Boeing 737 MAX scandal: planes so potentially dangerous that pilots refused to even fly them back to their hangars to be grounded. It takes the experienced hand of director Rory Kennedy and her collaborator Keven McAlester (under the aegis of Brian Grazer and Ron Howard at Imagine) to distill all the volumes of dry reportage on this cover-up into a must-see documentary which is conventional to a fault but about as solid an indictment of corporate greed as could be wished for.

Despite its accessible Netflix-friendly framework, there is something extra, almost unquantifiable here. It’s perhaps the combination of Kennedy’s access, her skills, the story itself and the time it is being presented which combine to make Downfall a highly uncomfortable mirror on modern society’s mores. It’s not an easy watch for so very many reasons.

The typical documentary building blocks are all here, timed to a fault in a precision 90-minute package. Downfall starts out with a brief precis of Boeing’s origins and prestige status: ‘If it ain’t Boeing, I ain’t going’. Kennedy then moves forward to the two tragic crashes of the brand-new Boeing 737 MAX jets within five months of each other (late 2018 and early 2019, in Indonesia and Ethiopia). She then spins the viewer into a web of a cover-up on the part of the corporate giant, as people and safety and honesty are gradually sacrificed in the pursuit of profit.

What adds extra salt to the wounds of the families of the 346 dead - killed only because of greed - is the level of prior knowledge involved. No sooner had Lion Air flight 610 out of Jakarta crashed In October 2018 with the loss of 189 souls than Boeing was briefing that ‘an American pilot would never have gotten into this situation’. (Yet Lion Air was the very company that repeatedly asked Boeing for pilot training on the MAX and was refused due to cost implications. Boeing denied that changes had been made to the 737 which would require that training even as they knew it was now a lethal flying machine.) This breezily colonialist tone meant that the Ethiopian Airlines flight was allowed to take to the air 16 weeks later, killing 157 passengers. China grounded its MAX fleet the next day, but the US still dragged its heels while Boeing refused to give any ground.

The story beggars belief, yet by 40 minutes into Downfall, Kennedy has pretty much covered the bones of it. If we thought we knew, however, she’s only just beginning, with the help of dedicated journalists, whistle-blowers, undercover footage, and a determined US senator (democrat of course, Rory is a Kennedy after all) to bring to light just how twisted things can get in the dark. ‘It’s a horrible, horrible story,’ says one commentator. It is indeed.

There is a brazen element to corporate, and indeed political, greed - and they’re often connected through a chain of lobbyists and shadowy back-room dealings, as also evidenced in Alex Gibney’s equally-powerful three-part opioid/Sackler documentary The Crime Of The Century (2021). They’re different films, of course, but chronicle the same deadly sin of greed. A take-home from Downfall is certainly the need for proper corporate oversight, and it is appalling how grubby unfettered avarice can be, or how society can become accustomed to it (a $62m payoff to the CEO after all of this?). Another take-home though is how much we still rely on journalists, whistle-blowers, truth-tellers and documentarians like Kennedy to try to pull society back on course when it veers off that runway.