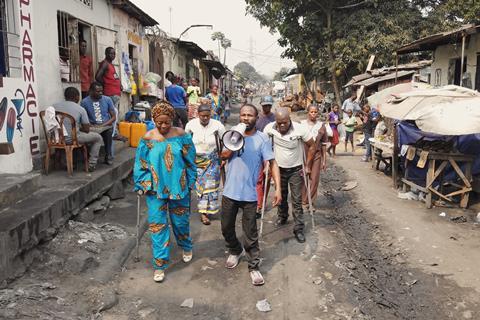 Hollywood endings tend to reward determination with victory, but in the real world, it’s often the determination itself that is the story, payoff or no payoff. The original title of Downstream to Kinshasa is En Route pour le Milliard – “en route for the billion” – and it’s the ‘en route’ part that’s essential in Dieudo Hamadi’s film, not least because travelling any road is a significant challenge to the seriously injured protagonists of this Congolese documentary. Now playing in DOK Leipzig, the film was included in the 2020 Cannes Official Selection, which should fuel interest for a work that is uneven in form but arresting in content and especially vital as a commentary on contemporary African society, human rights and disability issues.

Hamadi, whose films include National Diploma (2014) and Mama Colonel (2017) documents the fallout from events in his hometown of Kisangani, in the Democratic Republic of Congo where battle raged between Ugandan and Rwandan troops for six days in June 2000. Nearly 4,000 members of the town’s population were killed and 3,000 wounded, and Hamadi’s film focuses on the efforts of those survivors who have fought to have the conflict officially recognised and to get compensation for their injuries. The damages some incurred are shocking – one of Hamadi’s subjects, Mama Kashinde, was left without limbs, while a younger woman, Sola, is one of several people we meet whose legs were replaced by uncomfortable and substandard prostheses.

The film focuses on a delegation of 12 who decide to take the fight to the capital city of Kinshasa, which entails a long boat trip down the river Congo. This forms its central section, and the journey is quite startling - as is Hamadi’s own hand-held camerawork. The boat actually appears to be two vessels hitched together end to end, its deck crammed with travellers and their possessions; Hamadi pulls off some extraordinary long takes following his subjects around the deck, weaving in and out of the crowd, under a precarious canopy of tarpaulins. A sequence in which the boat hits a patch of heavy weather is powerfully immersive, with a kinetic intensity reminiscent of Castaing-Taylor and Paravel’s seagoing documentary Leviathan.

Hamadi similarly gets into the thick of it in a sequence that follows the delegation to a government building in Kinshasa, where they are looked at askance by a group of sleek-suited officials, then brusquely turned away by a guard – with Hamadi himself visibly getting roughly shoved in the ensuing scuffle. This pretty much sums up the protesters’ experience with the powers that be; towards the end of the film, their MP suspends her support because she’s busy with her election campaign. Jubilation comes with the election of a new president, Felix Tshisekedi. It’s seemingly good news for Kisangani, although as soon as we see the celebrations, it’s hard to repress a sense of plus ça change…

What runs through the film is a sense of the absolute tenacity of those who survived the battle in Kisangani – modern history’s other so-called ‘Six Day War’ – who are seen at the start of the film going about their daily lives and taking part in a commemorative procession to a patch of land where over a thousand bodies, many unrecognisable, were buried in a mass grave. Some of Hamadi’s main subjects also take part in a piece of stylised, agitprop-type theatre evoking their experiences. This is glimpsed intermittently through the film, with them speaking or singing against a black background; it is unclear, however, whether this was staged strictly as part of the film, or as a real-life performance, although an audience is glimpsed briefly towards the end.

These theatre interludes rather dilute the film’s overall cogency, and you can’t help wishing that Hamadi had played it straighter in some senses – perhaps by allowing more time for us to get to know his various subjects. Some emerge very strongly as individuals, not least Sola, a charismatic and skilled singer, and a pugnacious older man identified in the end credits as Président Lemalema. While we get to spend time with them on their mission, and before they leave, we don’t get to know any of them that well, or learn a great deal about the ordeal that led them to this situation. Fleshing out those parts of the story may not have been Hamadi’s intention, while portraying unbowed collective action (and, in those stage sequences, collective self-representation) certainly was. But his choice leaves Downstream to Kinshasa feeling frustratingly uneven, and his subjects less comprehensively done justice to than they otherwise might have been.