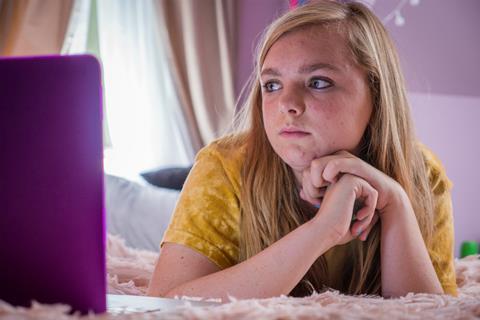 When we first meet 13-year-old Kayla Day, she is, like so many of today’s adolescents, making an online video, in which she talks about the challenges of being yourself at the same time as she herself, is struggling to do just that. In between her multiple “ums,” “you knows,” “likes,” and empty platitudes, the real Kayla Day may be in there somewhere. But in this alternatingly funny and sad social-mediated spin on the typical coming-of-age film, it will take her a while to figure it all out.

In his debut feature, actor and comedian Bo Burnham (The Big Sick, MTV’s Zach Stone Is Gonna Be Famous) tackles an apropos topic given his background as a teenage online sensation. (he has over 1,3m  subscribers to his YouTube channel.) Burnham clearly knows the milieu of today’s adolescents; a particularly vivid early montage in the film, scored to Enya’s “Sail Away,” depicts Kayla’s lyrical and disturbing journey down the Internet rabbit hole of Buzzfeed quizzes, YouTube clips, and snapchat feeds. For the uninitiated, it may look like some kind of new-media-fueled hallucinogenic drug-trip. For teenagers, it’s just their nightly media ritual.

While Eighth Grade may look, on its surface, like a typical adolescent comedy, with its underdog protagonist pitted against popular girls and boy crushes, it is more a piquant series of vignettes that form a singular and focused portrait of youthful angst. Will younger audiences leave their pocket-sized screens to see this cinematic sketch in movie theaters, or discover it on iTunes, Amazon, or torrent sites? It will likely depend on U.S. distributor A24 Films, who’ve managed to make such domestic box-office successes out of films such as Lady Bird, The Disaster Artist and Spring Breakers. If anyone can make Eighth Grade work, it’s them — together with Burnham’s many online fans.

The film follows Kayla — voted “Most Quiet” by her class — through a series of painfully awkward encounters on the eve of her middle-school graduation. Early on, she finds herself at a popular girl’s birthday pool party, which Burnham presents like some kind of absurdist nightmare. Accompanied by a loud, pulsating soundtrack that heightens the anxiety, Kayla, holding herself tight, enters the pool as if it was filled with sharks. When it’s her turn to give a present to the birthday girl, she offers a card game (“like Go Fish, but more fun”), much to the chagrin of the too-cool girls around her.

When Kayla takes a field trip to the high school, where senior girl Olivia (Emily Robinson) acts as a mentor, the experience affords Kayla a lifeline. Olivia is supportive, friendly, and in a moment that blows Kayla’s mind she gets invited for a night out at the mall. Hanging out with the high-schoolers offers Kayla a momentary boost of confidence, until one of the boys gets her alone in the backseat of a car for a game of truth-and-dare which quickly degenerates from uncomfortable to upsetting. In many of these scenes, Kayla’s awkwardness is so palpable it’s not funny so much as squeamish.

Much of the credit goes to child actress Elsie Fisher (Despicable Me) who, unlike so many teen movies, looks like an actual 13-year-old and, when she speaks, her dialogue comes out in insecure fits and starts, intermittent phrases and half-heard words. It might be easy to laugh at Kayla, but Burnham and Fisher endow her with so much pathos that audiences are more likely to feel sympathy.

Counter to the expectations of the genre, Eighth Grade also lacks any big set-pieces or triumphant climaxes. Kayla’s brief reckoning when she rips into the high school “mean girl” is less exultant and more satirical. If there’s any kind of emotional resolution, it arrives with a tender fireside tete-a-tete between Kayla and the father (played by a competent Josh Hamilton) she’s previously pushed away. It’s a much-needed sweet and emotional culmination to a film that is dominated by heartbreaking awkwardness and the horror of modern teenage culture.