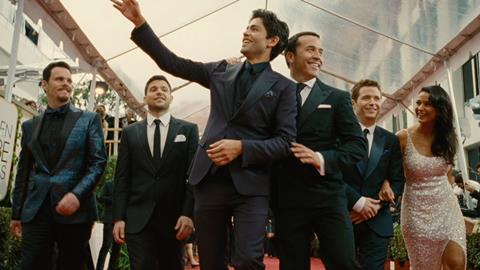 A tedious celebration of Hollywood excess and male hedonism, Entourage is the feature film adaptation of the popular, Emmy-winning HBO series. Trying to wring laughs from the nauseating sex-and-stardom exploits of fictional Tinseltown A-lister Vincent Chase (Adrian Grenier) and his buddies, Entourage consistently comes across as sour, shallow and misogynistic.

Entourage wallows in its protagonists’ obnoxious attitude towards women. The female characters on display are mostly either sex objects to conquer or nagging wives who must be endured

Releasing in the US on June 3, Entourage will face stiff comedic competition from Melissa McCarthy’s Spy, which opens two days later. It has been four years since the HBO show went off the air, so Warner Bros. is taking a gamble that fans have been clamouring for a reunion. And international audiences may be even less enthusiastic considering the film boasts no major stars in lead roles. (Liam Neeson, Entourage producer Mark Wahlberg and others provide brief cameos.) With reviews probably toxic, the film will most likely beat a quick retreat to DVD and cable, where those who liked the series will feel quite comfortable watching this big-screen version on television.

Picking up where the show ended in 2011, the Entourage film drops us back into the life of Aquaman megastar Vincent Chase, who has decided that he wants to make his directorial debut with Hyde, a dystopian drama based on Dr. Jekyll And Mr. Hyde. Convincing his long-time agent-turned-studio head Ari Gold (Jeremy Piven, who won three Emmys for the role) to green-light the film, Vincent teams up with his buddies — manager Eric (Kevin Connolly), driver Turtle (Jerry Ferrara) and half-brother actor Johnny Drama (Kevin Dillon) — to make the movie and get into different misadventures with L.A.’s most beautiful women.

Created by Doug Ellin, who wrote and directed this film, the Entourage series played like a male equivalent of the dishy, witty Sex And The City, which also started on HBO before transitioning to film. But this Entourage adaptation badly misjudges these characters’ appeal, upping the stakes from the original series without giving Vincent’s creative aspirations much resonance. Early on in the series, Vincent’s relative low profile allowed his and his entourage’s Hollywood dreams to seem charming. But pumped up to movie dimensions, the characters’ concerns feel meaningless, Vincent and his pals’ obvious privilege undercutting any sense of drama or pathos.

More critically, Entourage wallows in its protagonists’ obnoxious attitude towards women. The female characters on display are mostly either sex objects to conquer or nagging wives who must be endured. (The rare exception, UFC fighter Ronda Rousey, playing herself, is courted by Turtle, but there’s not much rapport between the two actors.) Ellin doesn’t mock his characters’ behaviour, though: In the world of Entourage, Vincent’s crew is to be indulged and glorified, while the womenfolk are there to be exceptionally hot and then get out of the way of the story. (For example, real-life model Emily Ratajkowski plays herself as Vincent’s possible love interest, but her main purpose is to give him someone to bed.)

If the movie were more provocative about its depiction of Hollywood’s gender inequality — or, at the very least, funny — this Neanderthal behaviour could potentially be intriguing or confused as commentary. But Ellin’s frat-house treatment of the entourage’s subplots is shockingly flat and sophomoric, even more so since the characters’ reductive worldview is trumpeted as adorable and triumphant at every turn. When Eric hooks up with two different women within 24 hours — while also spending time with his on-again/off-again lover Sloan (Emmanuelle Chriqui), who’s pregnant with his child — Entourage treats his situation as madcap, never really considering that he might just be a callous jerk.

This flippant attitude permeates the movie. As with TV show, the film adaptation features plenty of high-profile cameos — everyone from football stars Tom Brady and Russell Wilson to musicians like Pharrell Williams — but it becomes tiresome pretty quickly. Much like the gorgeous women, expensive cars and swanky houses paraded in front of the camera, Entourage’s celebrity guest spots are just numbing eye candy meant to sell an extravagant lifestyle these dullards have somehow stumbled into.

As far as the story goes, Ellin attempts to make Vincent and Ari’s odyssey to secure extra financing for Hyde entertaining and compelling. But Entourage is burdened by a snide narrative in which Travis (Haley Joel Osment), the drawling son of a rich Texas oilman, controls the film’s fate. If Entourage’s depiction of women wasn’t insulting enough, Ellin’s treatment of Travis, a backwoods ignoramus, is equally ungenerous. Even Ari’s shamelessly misanthropic tirades — a highlight of the show — have lost their nasty edge. Throughout the movie, characters worry what will happen if Hyde bombs. The people behind this big-screen Entourage may soon be in the same boat.