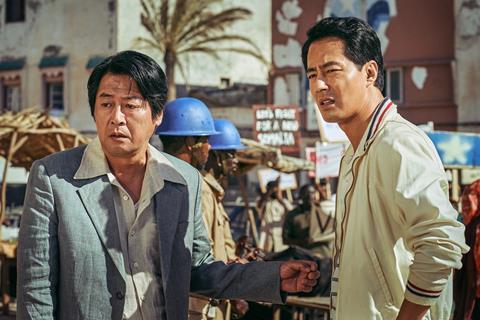 Countries don’t often submit action spectaculars to compete in the prestigious International Feature section of the Academy Awards: always keen to buck a trend, the riding-high South Korean industry has entered the smart and successful Escape From Mogadishu this year, a based-on-real-life film which is a vivid reminder of how political thrillers can provide nail-biting entertainment while still navigating complicated narrative terrain. There’s some comedy here too, not entirely expected from a film set during the dramatic collapse of Somalia’s Barre regime in 1991 in mass murder and mayhem, stranding the Korean embassies - both North and South - in its lawless capital.

Escape To Mogadishu is no subtle survey of Somali politics or the tragedy of that time, yet it’s still a serious illustration of how lingering national enmity can be addressed in a country that once experienced similar death and destruction itself. This year’s Korean box office champion by a long mile ($30m and still playing), Escape From Mogadishu can only benefit reputationally from its awards submission: serious-minded voters will see it is deserving of consideration, and recognise the parallels between it and previous Best Picture winner Argo.

Set two years before the events of Black Hawk Down (with narrative provoked by the same Somali rebel leader as the Battle of Mogadishu), Escape… carefully lays out its cards. The country is corrupt and President Siad Barre is little more than a gangster, but South Korean Ambassador Han (Kim Yoon Seok, from 1987) is in Mogadishu to try secure African votes in support of his country’s bid for full membership of the UN. North Korea, in the shape of veteran Ambassador, Rim (Huh Joon-ho)  has been there for two decades already though,  funded by the USSR, and easily outsmarts the South Koreans who are looking to capitalise on the success of the Seoul games of 1988 and take their place on the world stage.

South Korea is new to the game and naive; Han has struggled to get this sinecure, yet a goodwill package from Seoul intended for the Muslim President Barre contains a bottle of the alcoholic drink Soju. He’s constantly outsmarted by his Northern rival. Both diplomats are egged on by their all-powerful intelligence officers - Han’s KCIA operative Kang (Jo In-sung), and North Korea’s provocative Tae (Koo Kyo-hwan) in these petty battles.

Soon, however, the lights literally go out in both embassies — and the phone lines go down - as Mogadishu is attacked by the rebels and a bloodbath takes place outside their gates. Han’s five embassy staff, including his wife and Kang, can’t contact their embassy in Mombasa and have no UN protection; Tae’s sly move to get the rebels onside results in the destruction of Rim’s embassy, full of children as safeguards against the very same defection which would see South Korean staff awarded bonuses. But there are very real consequences all round.

Africa - Ryoo shot in Morocco - becomes a backdrop for some intense scenes which see the diplomats dashing between embassies, culminating in one of the best chase sequences of recent years. Child soldiers and bloodthirsty militia risk becoming colourful props, but Ryoo has got things to say about civil war that go beyond a superficial reading. The director of Veteran has crafted an energetic action film, certainly, but there’s some real heart and appealing personalities to populate it.

Technical credits are above-par, with the exception of some poorly-realised CGI-animated dogs which are over-used. Production design, in particular, recreates a haunting sense of place, even down to the embassy - Somali by structure, but Korean by design. Pulling off a film like Escape To Mogadishu, which ticks all the action and entertainment boxes while still retaining credibility as a political thriller is extremely hard. The Academy Award nomination recognises Ryoo’s achievement on a level past box office success.