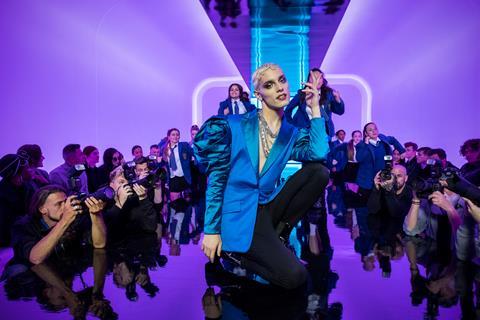 The sweet, likeable musical Everybody’s Talking About Jamie features fetching tunes and a winning story about a teenager determined to live out his dream of becoming a drag queen. Based on the hit West End show, the film radiates such positivity that the fate of the titular young man’s quest hardly seems in question — it’s merely a matter of how long it will take for the school bully and the uptight teacher to get with the program. Max Harwood’s big-screen debut coasts on charm and touching vulnerability, turning Jamie into an endearing stand-in for no doubt countless adolescents who just want to be accepted for who they are.

This Outfest opener streams globally on Amazon starting September 17, and the betting is that audiences embrace the picture’s comforting, crowd-pleasing tone. Viewers familiar with the Laurence Olivier-nominated production will probably want to tune in, and a supporting cast that includes Sarah Lancashire, Sharon Horgan and Richard E. Grant should only increase visibility.

Everybody’s Talking About Jamie is based on actual events, following the exploits of Jamie (Harwood), who’s just turned 16, living in Sheffield with his devoted, divorced mother Margaret (Lancashire). His teacher, the stern Miss Hedge (Horgan), advises her class that they must be realistic about their career aspirations, but the openly gay Jamie has lofty goals, wanting to be a performer — specifically, a drag queen. Encouraged by his mom and his best friend Pritti (Lauren Patel), Jamie starts to craft his drag-queen persona, which he’s hoping to unveil at prom, despite the objections of Miss Hedge and his homophobic classmate Dean (Samuel Bottomley).

As confident as Jamie is — and as relatively tolerant as his community is — he will still face obstacles, most notably in the form of a disapproving, distant father, Wayne (Ralph Ineson), who’s in denial about his boy’s sexuality. But it’s indicative of Everybody’s Talking About Jamie’s compassionate spirit that even Wayne is depicted as a tragic, closed-minded fool rather than a violent monster — someone so wrapped up in the idea of what he wanted Jamie to be that he can’t see the amazing son he has.

At times, the film’s stakes can feel a little slight — no one really offers much resistance to Jamie’s dream, at least not for long — but that’s to some degree because the principal opposition is actually from Jamie himself. Even though he’s excited to learn more about drag queens, what becomes apparent is that the young man is donning this new identity because he fundamentally dislikes who he is. Grappling with that crucial realisation ultimately becomes more important for Jamie than proving anything to the outside world.

The songs range from peppy uptempo numbers to affecting ballads, with the latter category highlighted by ‘This Was Me’, a new composition written for the film in which an ageing shopkeeper, Hugo (Grant), who used to be a drag queen reflects on how much more fraught a proposition being gay was in his younger years — in large part because of the AIDS crisis. The number, highlighted by Butterell’s clever use of flashbacks involving the present-day Hugo literally looking back at his old life, adds a bittersweet tenor to Everybody’s Talking About Jamie, reminding LGBTQ+ youth that, no matter the clear difficulties they face in modern times, it can’t compare to the trauma and ridicule experienced by past generations.

The narrative moves along briskly enough, although the plot complications are fairly predictable, up to and including a big finale in which Jamie will have to face down those trying to deny his authentic self. But the performances are so modest and lovely — and the empowering message presented with such warm nonchalance — that it’s easy to be like most everyone else around Jamie and cheer him on during this journey of discovery. The happy ending is assured, and quite satisfying.