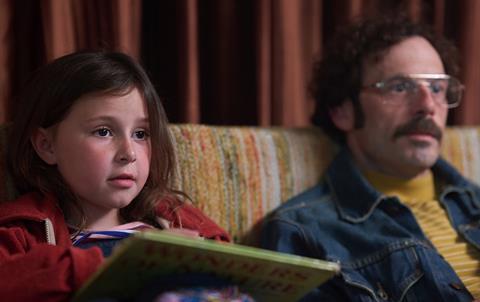 The photographer Andrew Durham makes his directorial debut by adapting Alysia Abbott’s well-loved memoir about growing up with her gay father in San Francisco during the heady days of the mid-to-late 1970s, before the spectre of AIDS began to make itself felt (although it is a looming, inevitable presence in this sweetly heartwarming film.)

To its credit, this slow-moving, almost episodic piece takes a child’s-eye view of events, in which facts only slowly make themselves clear to the central character. Even still, though, the third act becomes a weighty inevitability despite warm performances by Scoot McNairy as the dad, Steve, the young Nessa Dougherty as the child Alysia (played by Emilia Jones in later years). Fairyland is very much a double-hander and a three-parter, with an attractive, nostalgic feel and a similar, slightly languidly-paced air to Tales Of The City. It should play well on both streaming and the LGBTQ+ circuit as a moving, consistently engaging drama which never quite takes hold the way it should.

A certain difficulty with dialogue and exposition can hamper the flow of this American Zoetrope film, produced by Durham’s longtime collaborator Sofia Coppola. It’s not unusual for a character to deliver a slab of plot on a phone call, for example – although, to his credit, Durham moves it swiftly along for the first part. He starts out dramatically, with Steve answering a late-night phone call informing him of the death of his wife in a car crash as young Alysia (Dougherty) listens in. Soon, his mother-in-law (played by Geena Davis) is asking whether Steve will give up his daughter, who needs a ‘proper family’.

A move across the country to San Francisco’s Haight-Ashbury district and the first of Steve’s endless carousel of colourful male friends makes things clear to the viewer if not Alysia, who won’t ask some pertinent questions until she is being played by Emilia Jones as a vaguely gothic 80s kid who is pissed off with the world in general, and her dad in particular. In the meantime, it’s saunas a-go-go for Steve who writes books that are rarely published and takes a very laissez-faire attitude to child-rearing. Alysia goes unbrushed and unwashed to a fancy French school paid for by her grandparents, for example, while Steve hits the bathhouses with his latest boyfriend (Adam Lambert makes a cameo here), telling the child to bus herself across San Francisco alone at night.

The cat’s in the cradle, though, as Harry Chapin sang at the time, and soon enough Alysia is set to go to college and the parental pull-push has naturally changed direction. Even a drug-pushing former flatmate, played by Maria Bakalova, has become a pharmacist. Steve is left alone, to visit his dying friends, as Alisha reaches out to grasp her own life. (You can count the minutes until someone says: “I/we/he did the best we could.”) Alysia needs to escape and find a life for herself at the Sorbonne –a sort of Emily In Paris existence, where she gets a hot French boyfriend with a top apartment before Dad calls her back home to San Francisco with the news we’ve all been expecting since about 15 minutes in.

Durham captures a place in time quite beautifully, and McNairy is sympathetic and believable playing a character who could be perceived as weak, or neglectful, but instead comes across as a somewhat hopeless romantic. It’s really his performance that lingers, despite the fact that Steve is only ever perceived through Alyshia’s POV prism. He has to be fun dad when her reminiscences dictate, neglectful dad, gay activist dad and sick dad, and McNairy scoops all the threads together to portray an unusual, and uniquely poignant parental figure.

Screenplay: Andrew Durham, from the book ‘Fairyland: A Memoir of My Father’ by Alysia Abbott.