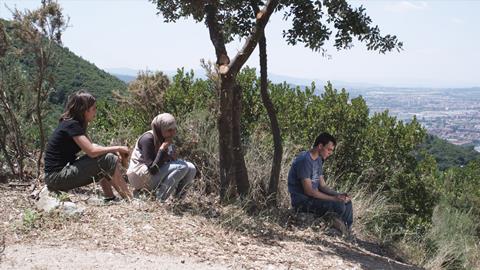 Teenage numbness proves catching in Fin, an uncommunicative slow burner about three young people biding their time on the road to nowhere. This inert essay in laconic melancholia exhausts the patience long before its eventual revelation, however, and commercial prospects seem minimal.

Performances are functional and undemonstrative, the low-charisma protagonists essentially registering as figures in a landscape rather than actors

Written and directed by Argentinain-born Luis Sampieri (Cabecita Rubia), the film begins on a very long take, as a young veiled Muslim woman (Chaoui) walks uphill to an appointment with a surly youth (Gibert), who carps obnoxiously when he sees that she is Arab. Another young woman is present, the taciturn Ana (Garres), whom the man dismissively describes as a manic depressive. The Muslim woman goes by the name of Mishima, but it’s only later that we learn that she’s really named Ramia, while the film is nearly over before the boy identifies himself as Iker.

Iker drives the two young women to a nearby town then, after a brief stopover, to a secluded, thickly wooded place in the countryside. The three get out of the car and wait – but for what, or whom, is left unexplained. Indeed, nothing much is said altogether, Ana maintaining a glum silence, despite Ramia’s cursory attempts to spark conversation, with Iker only offering occasional sour remarks.

We know that the three are setting about some business, which is making the women nervous, and we assume that the women are paying Iker, who generally keeps his distance. Whatever they’re planning is seemingly illicit, as Iker is worried about the police finding out what they’re up to.

So the three bide their time, as does the film. In fact, the only event to pack any energy comes when Iker splashes a bucket of water on the car windscreen. Some sheep and goats pass through, and there’s a mysterious video insert of a beekeeper.

The explanation of the trio’s odyssey comes some ten minutes before the end, and would be effective enough a reveal in itself, if it weren’t followed by a coda in video diary style which bathetically establishes the film as a rueful contemplation of ennui and alienation among today’s youth. The sociological angle seems almost like an afterthought at the end of a film that, for better or worse, has dictated its own terms as an opaque and muted mood piece.

Performances are functional and undemonstrative, the low-charisma trio essentially registering as figures in a landscape rather than actors. An eccentric score featuring sitar and whistling at least breaks the uniform glumness, if only by its incongruity.