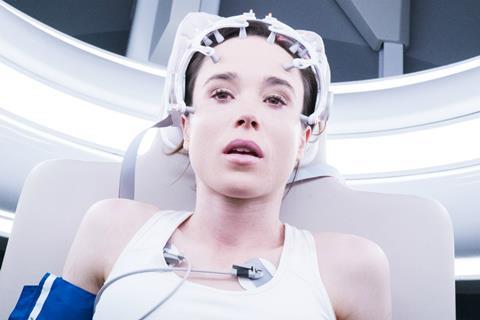 Revisiting Stephen King’s It may have paid box-office dividends but lightning fails to strike twice with Niels Arden Oplev’s stale, uninspired remake of another 1990 genre classic. A sleek visual polish and a game cast can’t disguise the fact that Flatliners is one film that should have carried a Do Not Resuscitate Order.

The original Flatliners achieved a domestic gross in excess of $60 million in 1990, was Oscar-nominated and made the top 20 box-office hits of the year. It still has a viable premise of medical students attempting to gain personal experience of the afterlife and then having cause to regret it.Haunted by guilt over her role in the death of her sister, medical student Courtney (Ellen Page) is now the one who initiates a project to map the activity of the brain after death. This requires fellow students Jamie (James Norton), Sophia (Kiersey Clemons), Milo (Nina Dobrev) and a reluctant Ray (Diego Luna) to supervise her death and then revive her in the nick of time.

Ethical dilemmas, moral qualms and legal issues are given a perfunctory airing before the experiment progresses. This is a film that rarely feels the need to sweat over credibility or make the characters sympathetic; some of the junior doctors live in the most fabulous apartments and posh boy Jamie is comfortably ensconced in a yacht moored in the local harbour.

The film is at its most banal when it depicts Courtney’s journey into the afterlife by having the camera soar into the skies and glide over the city as she is drawn to the bright aurora borealis-style lights of twinkling stained glasses windows in a church. Once back among the living, Courtney finds her consciousness expanded and suddenly she is baking bread, playing the piano and diagnosing symptoms with razor-sharp skill. Naturally, everyone else wants to have what she is having, but it becomes apparent that the experiment carries consequences.

Each of the students is visited by some manifestation of a guilty conscience over past crimes and misdemeanours, allowing Oplev to trot out every tired old scary movie tactic from sudden jolts of noise to hands slapping at windows, inanimate objects developing a life of their own and creeping figures suddenly appearing behind someone’s shoulder.

No matter what Oplev throws at us, the film refuses to catch fire and just grows sillier and more contrived as it unfolds. It never feels distinctive and often has the air of just another entry in the Final Destination series.

The cast does their best to inject some life into their roles. Diego Luna’s sober, ex-fireman Ray provides the voice of reason, while British actor James Norton sports a decent American accent and exudes a glad-to-be-here vibe and puppy dog enthusiasm as irresponsible party animal Jamie. He also has the honour of reprising a line from the 1990 film that “today is a good day to die”. Ellen Page has the most developed character and squeezes some poignancy from Courtney’s anguish before all the flashing lights and creepy visitors take over.

Kiefer Sutherland is the sole veteran of the original film to make a return visit and seems to have slipped into Lionel Barrymore mould as a silver haired, cane-wielding, crotchety doctor exasperated by the ignorance and incompetence of a new generation. Both character and actor have good reason to conclude they did things better in his day.

Screenplay: Ben Ripley based on a story by Peter Filardi