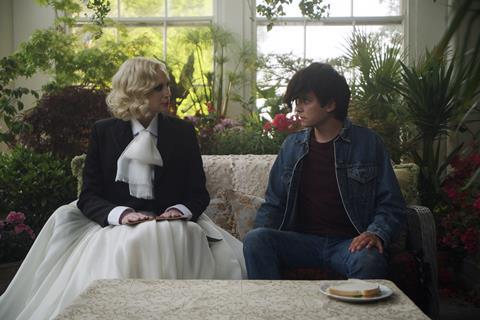 Absurdity is serious business in the films of Peter Strickland. The self-contained worlds in which his pictures unfold have always functioned according to their own singular, straight-faced logic and laws, guided by the twin forces of eccentricity and perversity. But even so, Flux Gourmet – an account of a month-long artistic residence by a collective of sonic caterers (no, really) – is a particular triumph. The funniest of his films to date, it’s a fully realised, immaculately tailored creation which conceals a slow-burning sense of mischief under its deliberate oddness and ornately deadpan dialogue.

Combining the aural obsession of Berberian Sound Studio with the exploratory psychosexual-kink rituals of The Duke Of Burgundy, and nodding to the ominous power of fashion espoused by In Fabric, Flux Gourmet feels like a culmination of Strickland’s fascinations and themes to date. More so, when you learn that the director himself broke down the barriers between the edible and the audible as a member of The Sonic Catering Band, which created electronic music from the sound of cooking and preparing ingredients (releases include the albums ’Live from the Canteens of Atlantis’, ’Seven Transdanubian Recipes’ and ’Food Science’). As such, the film should be keenly received by existing fans of Strickland’s unique voice, but, with its delicious comic savagery and a magnificently bonkers, full bore performance from Gwendoline Christie, it has the potential to win over a wider arthouse audience. Following the film’s premiere in the Encounters section of Berlin – a homecoming for the director, whose debut Katalin Varga screened in Berlin’s Competition in 2009 – a healthy festival run seems assured.

Narrated by Stones (Makis Papadimitriou), the writer or ‘docierge’ whose job it is to document the artistic process of each sonic catering residency, the film is divided into four chapters. These correspond to the four weeks of the residency, during which time the latest collective – a trio led by the charismatic but autocratic Elle (Fatma Mohamed) and backed by knob twiddlers Lamina (Ariane Labed) and Billy (Asa Butterfield) – turn on each other and question the very fundamentals of sonic catering. Flash points include the unresolved issue of the band’s name, sexual tension resulting from the overlapping relationships between the three and the increasingly contentious issue of whether or not to tone down the use of the flanger. This latter is a particularly heated topic as it comes at the suggestion of Jan Stevens (Christie), the residency’s regal host, and is seen by Elle as an intolerable suppression of their artistic freedom.

Meanwhile, the hapless Stones is plagued by gastric distress and excessive flatulence, something that the on site doctor (a gleefully demonic Richard Bremmer) suggests that he cure with reference to the teachings of Hippocrates: “Let food be thy medicine,” he smirks, while sipping yet another glass of wine. And a rival sonic catering collective, The Mangrove Snacks, who were rejected by Jan Stevens for their use of terrapins, are targeting the institute with disruptive acts of art terrorism.

There’s a Greek weird wave flavour to the picture which goes beyond the casting of Labed (Attenberg, The Lobster) and Papadimitriou (Chevalier, Suntan) and extends into the matter-of-fact, mannered oddness of approach. But, as with all Strickland’s pictures, the film’s unique personality comes from its meticulous design, in everything from costume to sound. And perhaps not surprisingly, the latter, an intricately textured soundscape full of analogue squeals and looping tapes, is a standout.