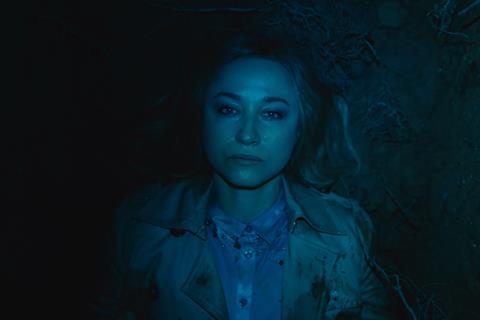 Questions of female identity, family responsibility and the stifling expectations of others are neatly embedded in the moody psychological drama Fugue. Director Agnieszka Smoczyńska became a talent to watch after her feature debut The Lure and delivers a poised, consistently intriguing combination of suspense with a timely consideration of a woman’s journey towards self realisation. Fugue could become a festival fixture after its Cannes Critics Week premiere.

A satisfying, thought-provoking exploration of the commitment and sacrifice required to be true to yourself

Smoczyńska’s feature has a cracking, attention-grabbing opening in which a woman emerges from the dark into the light.We start to see that she is walking along tracks that lead her into a train station. She struggles to clamber on to a platform. Nobody helps her. Dishevelled, bruised and bloodied, she has the dead-eyed look of someone who has survived a major trauma.

Two years later in Warsaw, Alicja (Gabriela Muskała) has regained no memory of her past life or what happened to her. Yet, when she is asked to sign a document she instinctively writes the initials KS. A television appeal brings contact from her family and the information that she is married with a son and called Kinga Slowik.

The fact that her homecoming is far from joyous speaks volumes. Relatives and rooms feel as unfamiliar as a distant planet. Her family seems strangely indifferent to her. Returning home feels more like incarceration than liberation. Gliding, prowling camerawork allows us to feel her sense of claustrophobia.

The questions of who she was and what happened to her would be sufficient to propel the narrative but Fugue also becomes fascinated with what happens next. Can free-spirited Alicja go back to being the woman, wife and mother that Kinga was? Would she even want to? Has disappearing down a rabbit hole allowed Alicja to discover a wonderland she is reluctant to abandon?

There is often no space left for Alicja in the family unit. Her son and husband have transferred their affections elsewhere and the framing often isolates her or places her at the edge of a group. She is present but rarely made to feel as if she belongs.

Gabriela Muskala’s performance is built around the most expressive of eyes that blaze with a fierce resentment at times. Her anger, cynicism and frustration are persuasively conveyed and make Alicja a compelling character as Gabriela Muskała’s screenplay unravels her past and reveal the bigger picture. The weary calm of Łukasz Simlat’s performance as her husband provides a balancing contrast as complex emotions are revisited. The end result is a satisfying, thought-provoking exploration of the commitment and sacrifice required to be true to yourself.