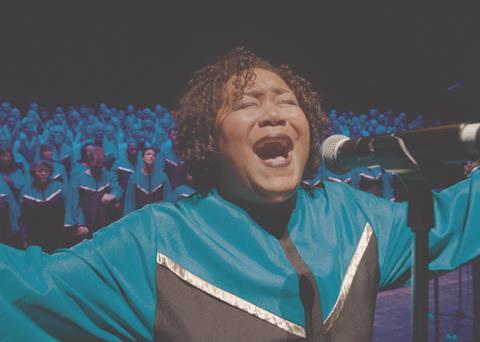 Director David Charles Rodrigues highlights the ongoing struggles of America’s LGBTQ+ community not via the usual avenue of impassioned talking heads and violent confrontation, but by following the San Francisco Gay Men’s Choir (SFGMC) as they embark on a singing tour of the deep South following the divisive 2016 election. Successfully harnessing the power of both music and message, documentary Gay Chorus Deep South draws its strength not only from its subject, but also the effective way in which it it presents its arguments.

“I’m not afraid of your Jesus,” the chorus sings in unison, during one of their many moving anthems. “I’m afraid of what you do in the name of your God.”

While it joins an ever-growing pantheon of Trump-era protest documentaries, Gay Chorus Deep South is engaging and colourful enough to resonate after its Tribeca debut. It should also make its mark on further festivals and events; particularly those with a focus on community activism and LGBTQ+ rights. Streaming or broadcast platforms seem a likely final destination for a film which deserves to connect with a wide audience.

Teaming up with the Oakland Interfaith Gospel Choir — a move which they hope will make them more accessible to Bible Belt audiences —the SFGMC embarks on a week-long tour of Mississippi, Alabama, Tennessee and the Carolinas; areas where a raft of faith-based anti-LGBTQ+ laws have come into effect over recent years. Leading the way is SFGMC artistic director Tim Seelig, a former minister who was ousted from the Southern Baptist Church in Texas when he came out at the age of 35.  The church also funded litigation by his ex-wife, which saw him lose access to his children, which both compounds Tim’s long-held anger and motivates him to spread his message of inclusion and acceptance.

Tim’s past experiences are sad, but not unique; many of the chorus’ members have also fled deeply religious backgrounds. Ashle, who is mid-way through transitioning from male to female, recalls how her entire congregation were encouraged to “pray the gay away” when she was young. Jimmy, now in his 50s and fighting cancer, hopes that his fiercely conservative estranged father will attend one of the concerts.

It proves to be a rocky road from the rainbow-flagged liberal streets of San Francisco to home-spun places like Jackson, Mississippi, or Selma, Alabama, where, notes gay Alabama congresswoman Patricia Todd, “bibles are more important than the constitution.” Before leaving California, the chorus receives aggressive warnings, and everyone is aware of the risks of being ‘out and proud’ in such insular locales. “I’m not afraid of your Jesus,” the chorus sings in unison, during one of their many moving anthems. “I’m afraid of what you do in the name of your God.”

What they are facing is, of course, reminiscent of the civil rights movement of the 1960s and Charles intersperses archive footage to make the point that equality has never been part of America’s democratic make-up. A sequence in which the chorus marches over the Edmund Petters Bridge in Selma, retracing the steps of Martin Luther King over 50 years before, highlights an ongoing struggle, as do interviews with young LGBTQ+ concert-goers who continue to face hostility on a daily basis. A transgender teen explains how her parents have enrolled her in Christian therapy. A young woman recalls how her grandparents burnt her gay pride flag on their front porch.

Yet  Rodrigues also takes care to highlight the fact that the majority of Southerners do not subscribe to the views of the extreme alt-right. A conservative radio host confounds Tim’s expectations by championing the chorus’s campaign for peace; a deeply religious Alabama family hosts Ashle for dinner and friendly debate; a South Carolinian Southern Baptist church welcomes a performance from the chorus. Such moments make individual chorus members — and, likely, many viewers — realise that they themselves may be prejudiced against those who don’t share their views; that unfair judgement runs both ways; and that hope and humanity can prevail, even in the darkest of times.