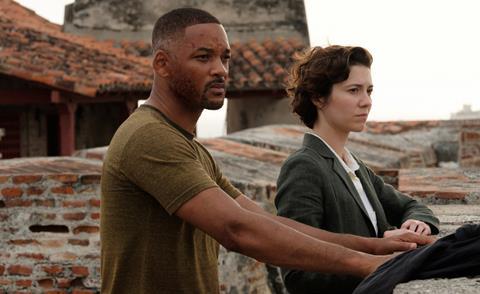 Seen at 60 frames per second (fps) on 3D-Plus (2K resolution), Ang Lee’s action spectacular Gemini Man proved a compulsive watch: not for the usual ingredients of can’t-look-away Hollywood cinema such as acting – Will Smith takes a dual role - or plot, both of which fell a little flat, and seemed almost wilfully generic. As a viewing experience, though, this picture delivers as a prototype of future action film-making. Full of movie magic, but not at all magical, Gemini Man could prove a game-changing event for the industry, although it is unlikely to make a similarly deep impression at the box office.

Ang Lee, who has been tinkering around with projection speeds for some time now to mixed fortunes (Billy Lynn’s Long Halftime Walk), and with 3D back since The Life Of Pi, opens up the screen to the side and all the way to the back with astounding, disorientating depth-of-field. (Gemini Man was shot at 120 frames per second for 4K projection.) He pits 51 year-old Will Smith against his 23 year-old, wholly digitised self, completely seamlessly. This Weta Studios-engineered, hyper-real achievement is, like all high frame projection, hard on the eye -  until the action kicks off, and then you can’t look away.

Thrill-seekers after an incredibly realistic punch-up would do best to watch this crazily ambitious film - which was shot on location in three continents – on the big-screen as intended, either in 48 or 60 fps. (Chinese financiers include Fosun and Alibaba, and the technology seems very apt for their domestic audiences’ current taste for a blend of film and ultra-high-res-gaming; in fact, the only cinemas currently capable of showing it in 120 fps/4k are in Asia.) Regular flat-screen home viewing is likely to be even more of a disappointment than the flat plot this film is hung on.

Undoubtedly, this level of technical finesse puts all departments under immense stress. With such intense pixelated scrutiny the actors struggle to convey naturalism in a film which wants to emphasise realism. While Dion Beebe’s cinematographic achievement is never anything less than impressive, it’s also there to be admired in itself, as opposed to primarily servicing the story. Colours, in particular natural greens, are too hard on the eye. And production design is extremely challenged to carry off studio work with any degree of believability. Some finished sequences mimic the experience of actually standing on a soundstage. Continuity is exposed, especially with the actors – hairlines, hair colour, ‘injuries’.

What you get in return is a sense of the future: work with mirrors (and in one case, chrome), chase sequences and underwater action which undoubtedly raise the bar for the industry as a whole. While the plot of Gemini Man is little more than a variation of the Mission Impossible or Bourne pictures, the film itself means they can’t quite be made as they have been before. Camera shots that seem to bend around the screen; hand-held camera right in the middle of chase sequences with a level of realism that has not been previously achieved – there’s no facial blurring – casts doubt on the future of CGI as we know it. The backgrounding and foregrounding of characters and extras is fascinating in a way that feels alien and often ugly but is also technically life-like. It’s all theoretically much more interesting than the drama on screen, however, making Gemini Man essentially a prototype, like one of its antagonists.

Smith plays a former special ops sharp-shooter and government assassin - the Bourne-y best there ever was, with almost inhuman talents – who wants to retire after 72 successful hits. A trip to his friend’s yacht, which seems designed solely to showcase the film’s high levels of comfort in 3D water, reveals that he has been misled by his bosses, however. Enter a stiff Clive Owen as a renegade division head who has started up a genetic programme to replicate Smith’s talents in a clone with none of the human emotions attached. Enter too, a comely sidekick in the shape of another operative on the run, played with a loose-limbed appeal by Mary Elizabeth Winstead.

Sometimes, Gemini Man brings with it a waft of John Woo’s Face/Off, but even though Ang Lee is attempting huge things technically, this film in itself hasn’t enough character to carry them. Sometimes, it lifts to unprecedented levels, when the younger and older versions of Smith dance through fight scenes or, in one case, over the rooftops and into the audience’s face a la Lee’s Oscar-winning Crouching Tiger, Hidden Dragon. The fact that Will Smith can be entirely recreated so successfully is obviously a game-changer for the Screen Actor’s Guild – Lee’s prowess makes the first attempts at this, back when Oliver Reed died during the making of Gladiator, even the reincarnations of Carrie Fisher and Peter Cushing in Star Wars, seem old and faded.

But Gemini Man is also proof that even while some things change, others remain stubbornly the same. The Screen Writer’s Guild can stand down: the there’s still no way to engineer a shortcut around a good screenplay.