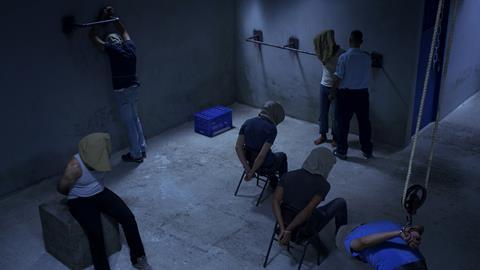 Ghost Hunting examines the Israeli torture of Palestinian prisoners by recreating an Israeli interrogation site and reliving the traumas of abuse which took place there. As cinema and psychology, Raed Andoni’s experiment may fall short, but its picture of the long-term effects of torture does hit home. Ghost Hunting won the Berlinale’s Silver Bear for best documentary and also figured amongst the Panorama audience awards, ensuring it a berth at least at festivals, especially those addressing human rights.

What’s clear from detailed descriptions of interrogation and abuse is that memories are agonisingly hard to purge, and that humiliation damages the victim for decades.

This documentary’s premise is straightforward enough. Andoni (The Fix, 2009) himself was interned and tortured as a teenager at al-Moskobiya, an Israeli detention center in Jerusalem. Now, he’s seeking to show the effects of brutal interrogation by reconstructing the place and reenacting what transpired there. He advertises in the newspaper for former prisoners who could be actors and craftsmen on his crew. In the West Bank, there’s a large labour pool of people who have been detained.

Shot in a generic warehouse space in Ramallah on the West Bank, Andoni’s film rebuilds al-Moskobiya’s interior, showing its seams by intention. Dramatically the film feels more like a work for the stage than for the cinema, as the cast play prisoner and jailer, and test each other in role-playing confrontations. With only one professional actor, Ramzi Maqdisi, plus Andoni, in the ensemble, it can sometimes seem like an adult education acting class or community theatre.

Plenty of Brechtian moments remind you that Andoni is telling you about the mechanics of telling a story. Interiors look like performance spaces, handcuffs are too shiny, the prisoners laugh. Workmen in the cast walk behind the action, carrying furniture and hammering nails into walls. Still the emotions that pour out of Andoni’s performers are real, all the more real when their bodies make contact. If the goal is to purge repressed feelings and memories in former detainees decades after their incarceration, that task is only beginning here.

At the end of the documentary, you feel that exorcisms only work in Hollywood movies. What’s clear from detailed descriptions of interrogation and abuse is that memories are agonisingly hard to purge, and that humiliation damages the victim for decades. Without any Israelis to testify for their side, the interrogations come across as effective and cynical tools for maintaining the military occupation. While experts have opined that torture does not work to obtain information, here we see that it is a reliable way to intimidate and demoralise an entire population.

The images that remain with you from this film are a reminder that the Israelis are hardly alone in the  mistreatment of prisoners. Animated sections that depict Andoni himself, in handcuffs and wearing a hood, recall American interrogations at Abu Ghraib. The cells that the crew builds look like prison cells anywhere, only cleaner. With films on human rights abuses filling festivals, do we need to be told something so obvious about the evils of torture that has been said so many times before? Those on the receiving end won’t think that it’s too much. Consider that 7,000 Palestinians are either in Israeli prison or confinement, and that the current US president endorses the use of torture.