'Graves Without A Name': Venice Review 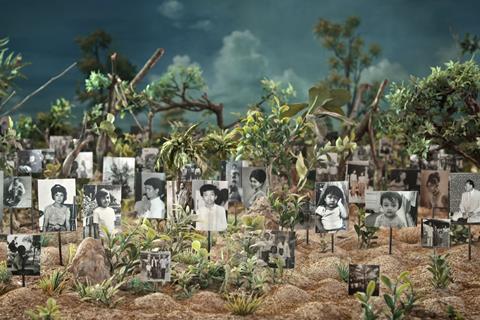 ‘Graves Without A Name’

The Cambodian director Rithy Panh’s exploration of the horrors inflicted by the Khmer Rouge has always been close to home; Panh lost many of his family and friends in the genocide. But Graves Without a Name, which opened has Venice Days, may be his most personal yet, with the director occasionally front of camera and attempting to finally exorcise his ghosts – or, more literally, to put his family to rest.  Following the success of his Oscar-nominated The Missing Picture and Exile, this quietly, profoundly moving film should find a committed festival audience.

A combination of the symbolic and the blisteringly real

A voiceover narrator (Randal Douc) sets the film’s agenda. While a “dead ideology” killed a quarter of Cambodia’s population, the director is setting out on “a celebration of the idea of living.” However, in order to do that, he needs to find the makeshift graves of his family – his father, mother, sisters and others who died in a labour camp during the revolutionary regime’s murderous reign – and give them something akin to a proper burial.

The film moves between the director’s use of religious rituals to attempt to find the graves and interviews with rural farmers who recollect the horrors they survived. It’s a combination of the symbolic and the blisteringly real, the two elements very much informing each other, since the farmers share the director’s own feeling that the souls of hundreds of thousands of casually disposed dead are still wandering the fields.

There’s a plangent poetry in the narration, derived from Panh’s selected French texts, including excerpts from Jean Cayrol’s screenplay for Night and Fog, and his own book The Elimination. This contrasts with the memories of his interviewees, which chart the fate of the people driven from the cities to the countries to work on labour camps or simply starve to death for the cause.

Tales of abject hunger, rape, murder and casual execution are told in such vivid, painful detail that they eventually begin to have a numbing effect, which may reflect the psychological outcome for the victims themselves. One of the farmers talks of a ceaseless Cambodian national trauma akin to a psychological disorder passed down through generations.

Sometimes a gorgeous visual is accompanied by a bitter resonance: a tree oozing blood; a small screen set up in a pretty nocturnal spot shows images of a labour camp; aerial shot of fields stretching for miles into the distance, however captivating, come with the knowledge that thousands of bodies are buried beneath what the voice-over refers to as “the landscape of a crime.”

It’s such contrasts that will keep viewers on their toes, horribly absorbed as Panh draws towards some sort of closure.