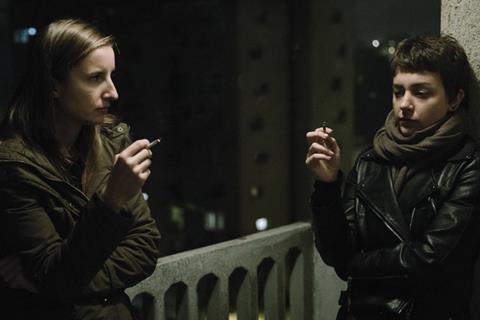 It’s not easy to mine a fresh vein in the well-dug world of dysfunctional family, but Slovenian Damjan Kozole does so with his highly entertaining Half-Sister. It’s a significant departure from his previous offering, Nightlife, for which he won the director’s prize in Karlovy Vary in 2016; where that film was visually striking, dramatic and unremittingly bleak, this is a more intimate, accessible character-study, less cinematic but very funny and narratively more satisfying. While the film should prosper on the festival circuit following it world premiere in Karlovy Vary competition, its scenario might well be considered ripe for adaptation for English-speaking audiences.

Irena (co-writer Urša Menart) and Nêza (Liza Marijina) are half-sisters with nothing in common other than their father, Silvio (Peter Musevski), and the disdain with which they treat both him and their mothers (Anja Novak, Labina Mitevska). Irena is a hairdresser, about to divorce; she’s tall, blonde, glacial, taciturn. Nêza is educated but unemployed, short, dark-haired, punkish, foul-mouthed and volatile.

The pair also have a profound dislike for each other, typically rooted in dad’s switch between their mothers (more confrontational, here, because one is Slovenian, the other Albanian). Necessity throws them together, however, when Nêza moves to Ljubljana to start a new college course and Silvio decides to fund an apartment for the sisters to share.

At first the film proposes something of a cliché – chalk and cheese siblings, their characters mired in gloom, hurling abuse at each other as they chain-smoke on a freezing balcony. The prospect for the audience is kitchen sink with particularly awful plumbing.  Yet this is merely a cunning strategy, and two factors serve to maintain interest and impetus: Irena’s ex, Brane (Jurij Drevenšek), is stalking his wife and may be dangerous; and Nêza, as written and played, is a fabulous comic creation.

On the surface, she is all rough edges and contradictions. She professes to have no friends, stopped running an Airbnb because she hates tourists and keeps a knife under her pillow, yet chooses her studies on the grounds that “I like communications and all of that”. She is constantly combative, yet derides her sister’s negative energy.

But beneath all the attitude lies a funny, vulnerable, decent person, a vegan on principle and conscientious dog owner, who will become an invaluable ally in her sister’s time of need. Marijina’s performance is rich in detail, from the masterly micro-expressions of Nêza’s appraisal of their new flat, through the telling transition from biker jacket to fake fur collar, to Nêza’s very novel way of dealing with Brane. Menart plays straight woman to all of this, but makes Irena’s own growth as a character equally appealing; when she finally decides to smile, we realise what she and the world have been missing.

The script inventively stitches the two women’s growing rapport – who knew you could bond over Psoriasis? There’s little of Ljubljana, more of the families’ coastal home in Izola, though the attention is focused primarily on the actors and a simple story of two siblings learning to like each other. In doing so, they may even make Silvio a better father and encourage détente between the families.

There are one or two missteps, a character perhaps going too far. But Kozole seems to be consciously avoiding the pessimism that often prevails in this part of the world, a fact he ironically acknowledges by the presence of Nêza’s pet; in Nightlife a man is mauled to death by dogs; here, ‘Jimmy’ is simply the butt, or should that be mutt of some very funny jokes.