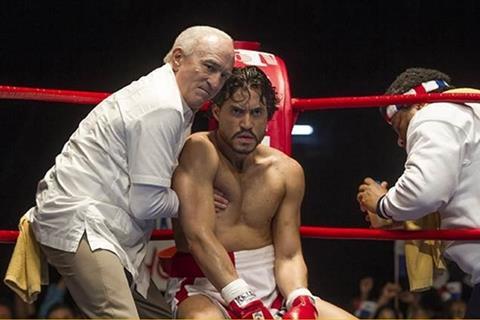 Chronicling the life of charismatic Panamanian boxing champion Roberto Durán, Hands Of Stone tests how far a film can go solely on heart, and in this case, it turns out to be just enough to overcome biopic conventionality. Venezuelan writer-director Jonathan Jakubowicz aims for a rousing, crowd-pleasing drama, and he’s assisted by Edgar Ramírez’s most impassioned performance since Carlos and, as Durán’s elderly trainer, Robert De Niro showing more fire than he has in far too long. The uneven, overlong Hands Of Stone won’t inspire anyone to revise their list of the best boxing films of all-time, but it’s a suitably impactful entertainment.

Even those not familiar with Durán’s career will be able to predict the arc of Hands Of Stone’s pedestrian rise-then-fall-then-rise-again narrative, which no amount of electrifying boxing sequences can surmount

Screening out of competition in Cannes, this Weinstein offering could piggyback off the success of last year’s Creed, and certainly fight fans who remember Durán’s heyday will be particularly interested. As for De Niro, his commercial clout lately is tied to films in which he’s hanging out with the Fockers, but moderate theatrical grosses could be supplemented by ancillary dollars from viewers who conclude they can watch Hands Of Stone from the comfort of home.

Ramírez plays Durán, showing how the fighter evolved from a volatile young man into a disciplined boxer thanks to the tutelage of American trainer Ray Arcel (De Niro), who is close to retirement before deciding to take a chance on the kid. We see Durán win the Welterweight title from Sugar Ray Leonard (pop star Usher Raymond IV) in 1980 but then face ignominy after he quits in the ring during their much-hyped rematch.

Jakubowicz (Secuestro Express) doesn’t bring much that’s fresh to the biopic or the boxing drama, instead focusing his energies on portraying Durán as a whirlwind whose meteoric rise made him a folk hero in Panama, which saw his bouts with the American champ Leonard as a metaphor for the nation’s resentment at being controlled by the superpower. Though overdone at times, the film’s connecting of Durán’s struggle with that of his homeland gives this authorised dramatization a sturdy poignancy, and it’s to Jakubowicz’s credit that he even spends a little time fleshing out the backstories of Arcel and Leonard back stories so that we come to understand these men better, too.

Blessedly, De Niro pulls back on the actor-ly tics that have plagued many of his recent dramatic turns, playing Arcel as an aging boxing lifer who believes in Durán and wants to see him succeed. It’s a relatively subdued performance, and although the character isn’t richly detailed, De Niro gives him a punchy grittiness.

Even those not familiar with Durán’s career will be able to predict the arc of Hands Of Stone’s pedestrian rise-then-fall-then-rise-again narrative, which no amount of electrifying boxing sequences can surmount. Still, Ramírez displays the star power that’s too often been misdirected since he broke through with Carlos six years ago. He’s seemed muted in Hollywood films such as Joy and Deliver Us From Evil, but here he gets to play a shameless, secretly soulful showboat, which allows him to utilise all his animal magnetism and coiled ferocity. At times, Hands Of Stone may be a rote retelling of a great fighter’s career, but Ramírez keeps us in Durán’s corner.