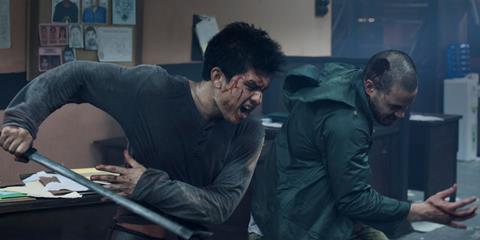 If ever a film took its title literally, it’s this one. Many guns are fired at many heads, along with numerous more creative methods of dispatching the supporting cast. This martial arts action picture from Indonesian genre specialists The Mo Brothers racks up a body count of several dozen even before the opening titles. Starring Iko Uwais (The Raid, The Raid 2) and his Raid costar Julie Estelle, this is a picture with first-rate fight choreography to match the quality of the martial arts talent involved.

The plot serves to deliver the main point of the film: the exceptionally visceral action sequences. On that level, the film delivers, unflinchingly and unflaggingly

The relentless pace and sheer bloodbath intensity of this picture suggests that it will register on the radar of any committed fan of the genre. Whether it can match the success of The Raid films theatrically is less certain, although the shared star and combat style should prove to be a useful marketing angle. Headshot is already part of the way into what looks to be a healthy festival run: having premiered at Toronto, the film subsequently screened at Fantastic Fest, and now Busan. It then has berths confirmed at Rio De Janeiro, Sitges and Chicago, among others.

At the opening of the main story, an unconscious body washes up on a beach. The man (Uwais), christened ‘Ishmael’ by his doctor Ailin (Chelsea Islan) who happens to be reading Moby Dick, spends two months in a coma before waking, unable to remember who he is. He has fragments of shrapnel lodged in his brain, and fragments of troubling memories haunting his dreams. Although Ismael doesn’t yet know it, he also has some very powerful enemies, and suppressed deep in his psyche, the fighting skills to defeat them.

Lee (Sunny Pang) aka The Sea Devil aka Father from Hell has a seemingly endless supply of foot soldiers, notably Rika (Julie Estelle) and Besi (Very Tri Yulisman), a killer hipster who specialises in battering people with a retractable truncheon. Lee will do anything to get to Ishmael, whom he knows as Abdi, including slaughtering a bus full of innocents and abducting Ailin. Pang goes all-out with his performance, even managing to turn the simple act of smoking a cigarette into a distillation of pure evil.

The plot, particularly a romantic angle which would have us believe that Ailin fell in love with Ishmael/Abdi while he was in a coma, is a somewhat rickety vehicle. But it serves to deliver the main point of the film: the exceptionally visceral action sequences.

On that level, the film delivers, unflinchingly and unflaggingly. Gruesome killings include chopsticks in the throat, a typewriter to the head, and a nearly unwatchable moment in which someone gets a spent bullet pushed into his eye socket. But although the graphic violence has shock value, it’s in the action choreography that the film most impresses. The Mo Brothers fling the camera, along with Ishmael, through the back window of a bus and onto the street below. They hurl it across the room in the wake of a grenade explosion. Shot largely handheld, the camera practically vibrates with excitement during the bloodier scenes.

The one-on-one fight sequences between Uwais and Yulisman and, particularly, the climactic fight between Uwais and the formidable Estelle are electric. And a final encounter between Ishmael and Lee leaves both men looking more like steak tartare than anything recognisably human.