'Heart of a Dog': Review 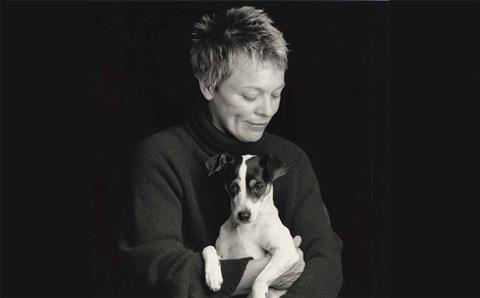 Heart Of A Dog is a collage of a memoir by the performance artist Laurie Anderson, her first feature since her 1986 concert film of Home Of The Brave and as sweet as a meditation on death can be.

Anderson is a long-standing star on the international avant-garde performance circuit, which ensures her heartfelt first person narrative a place in the autumn festivals and beyond. The theatrical release of Heart Of A Dog will be a widely-watched event in the US art cinema scene, and her fame abroad will make that event international. Subsequent HBO airings will test whether her ageing hipster fans watch cable television, or whether younger ones will want to watch Laurie Anderson.

Anderson is the one-woman band in this effort — directing, producing, drawing, animating her drawings, writing the music, performing the music – although she never speaks to camera, with her voice synchronized to a conventional film image.  Heart Of A Dog, which began three years ago as a short film commissioned by ARTE, is a work of fragments. So, Anderson suggests , is memory, as old cracked photographs and blurred slow-motion 8 millimeter film clips roll by.

Her story here is multiple overlapping stories, told in a sweet voice that borders on the too-sweet naïf. The title story is that of her adopted rat terrier, Lolabelle, acquired from a puppy mill, who lived for years and died in 2011.  You can’t miss Anderson’s motherly attitude towards the animal, once she tells a tale of the dog emerging from her womb.  While dogs are often far more appealing to their owners than to anyone else, a scene where dogs in Anderson’s (and Lolabelle’s) neighborhood approach the camera on the streets of Greenwich Village is a charmingly tactile dogs-eye-view of that world.

Those same streets were not far from the 9/11 bombing site, and Anderson decamps from that ash-covered place with her dog, as we watch surveillance cameras observe the roads, while her narration drones into a list of activities that the National Security Agency is free to monitor. In clever edits, Anderson cuts to the empty California hills where she and Lolabelle hike, while hawks flying at high altitude watch the pair, diving in to see if the small dog would make a good meal.  Drones by another name?

The film’s homing instinct also veers to Anderson’s mother’s death, and to the near-death of two of her brothers in a Midwest lake where the ice was too thin.

Heart Of A Dog is morbid, literally. The film is dedicated to Anderson’s recently deceased husband, Lou Reed, who talks and sings his way through Turning Time Around over the film’s final images.  It’s an inevitable, even predictable, crescendo, but an emotional crescendo (especially for Reed admirers) all the same.

Yet the memoir avoids taking the audience down with its subjects. Anderson’s near-infinite parade of hand-drawn images and photographs, an homage to the late Chris Marker, give her film a spirit of renewal amid the dead. Her massive paintings of Lolabelle – far more intimately conceived and created than the famous satirical dog photographs by the artist William Wegman, another avant garde veteran —  leaven the doc with  humor. Animated to give the effect that they are being drawn as the audience watches, the pictures bond the filmmaker to her public, and to the memory of her dog. There are also echoes of My Dog Tulip, Paul Fierlinger’s 2009 poignant but unsentimental animated documentary about life and death with a cherished pet.

Anderson comes from the art world, where videos in galleries can hold a single shot endlessly. They can be long here, too, in keeping with the film’s evocation of Buddhist practices. Her reminiscences of Lolabelle are intercut with views of blue skies in the slow style of James Benning.  A meditative shot of a snowy country road in black and white, with a tow truck’s lights flashing orange-red seems to draw on the video work of Gregory Crewdson.

Anderson’s breathy delivery and the exaggerated infusion of magic realism in her reminiscences may rub some audiences the wrong way. Her sense of loss in this amalgam of media can’t be denied.