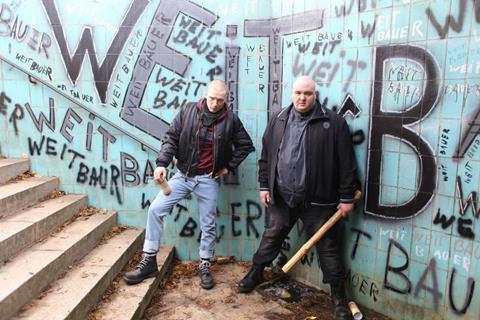 A quantum leap from his earlier, award-winning Stations of the Cross with its sobering sarcasm and rigorous structure, Dietrich Bruggemann’s new satire on skinheads, neo-Nazis, German politics, politicians and the media covering them throws all caution to the wind and unleashes a furious downpour of angry ridicule, offering an offensively unflattering portrait of Europe’s mightiest nation at the present time.

It’s difficult to avoid the conclusion that for Bruggemann, the religious fanatics of Stations of the Cross are more of a threat than a fascist comeback.

Supposedly a madcap comedy that should generate quite a bit of controversy at home in Germany, Heil’s irony is not sufficiently sophisticated to touch live nerves and its tendency to consider everyone in sight, without exception, as hopeless dimwits lets a lot of truly dangerous people off the hook. Premiering at the Karlovy Vary International Film Festival, the film’s commercial career will ultimately depend on how willing audiences are to find Nazis, past, present or future, funny to look at, even from the relative security of a cinema seat.

Pritwitz, a tiny little town near the Polish border, serves here as an unsavory symptom of the entire country - not that the rest of Germany is treated any better in Bruggemann’s film. Heil’s opening sequence depicts an illiterate skinhead, Johnny  (Jacob Matschenz) who has trouble spelling “white power” in the graffiti he is painting on a wall. A cop (Oliver Broecker) catches him in the act but but hesitates to do anything as he has been ordered to ignore any mention of Nazis, old or new, because they might give the place a bad name. Meanwhile, a TV cameraman adds a swastika to the graffiti because it looks better in his report, and Johnny’s dog, called “Jesus”, gleefully chases anyone he is pointed at.

With the level of the film’s humor now established, Heil goes on to tell the story of a black German writer called Sebastian Klein (Jerry Hoffmann) who has just been invited to Pritwitz to talk about his latest book, The Coffee-Stained Nation – Everyday German Racism. Just as he arrives in town, Sebastian is dealt a blow to the head and kidnapped by the goons of aspiring politician, Sven (Benno Furmann), whose goal in life is to become the next German fuhrer but not before he gets into the pants of local blonde Nazi pussycat (Anna Bruggemann, the director’s sister), who won’t let him touch her before he invades Poland.

Arguably, Bruggemann, who has written not only the script but also the heavy metal soundtrack, is profoundly disgusted by everything he sees around him. He no doubt means well, as do all the people who took part in this venture, from well-established stars like Furmann, to familiar TV faces like Broecker, not to mention cameos by celebrities from actors Hanns Zischler and Michael Gwisdek to the film director Andreas Dresen. But with all due respect to the way the director sends up the German political scene (the manipulated and manipulative talk shows, left wing impotence, academic jargon, etc) none of the subjects dealt with here is really funny and blaming it all on sexual frustration or psychological hang-ups is doing these people a service. Even if Bruggemann does imply real evil at play, he can’t help but turn it into a joke as well.

Since no one is supposed to take the plot itself too seriously, lapses in continuity and the ability of some people to be in several places at the same time, might seem like intentionally spoiling the fun. None of the precision and originality of this director’s former effort is visible. All that’s left here is a jaundiced view of Germany today and it’s difficult to avoid the conclusion that for Bruggemann, the religious fanatics of Stations of the Cross are more of a threat than a fascist comeback. All that is needed to prevent it, and bring the people back to their senses, is a smack on their heads.