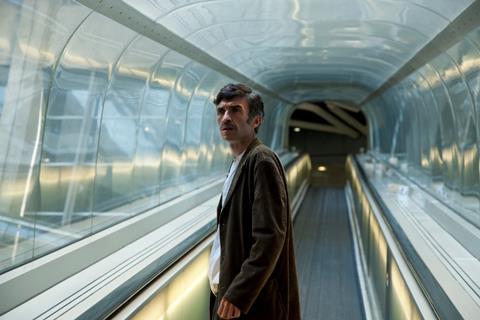 The debut feature from visual artist Fiona Tan starts at the end, with a title card in a cinema signalling the closing credits. The lights come up to reveal a man comatose in his seat, then the audience saunters in, backwards – the film, and the music that accompanies it has been reversed. Tan, we quickly learn, has little use for the conventions of traditional narrative filmmaking.

At the heart of the film, which Tan co-wrote with Screen International critic Jonathan Romney, is a man who has lost his memory after a violent assault

A mercurial and sometimes bewildering blend of fiction, documentary and cinematic essay, History’s Future is an explosion of ideas and imagery. And while any film which essentially attempts to rewrite the rules of cinema will present certain marketing challenges, there’s a playfulness and humour here, not to mention a scorchingly charismatic turn from Mark O’Halloran in the central role, which should help the picture find an audience. A healthy festival life seems likely, and adventurous distributors could tap into the interest that Tan’s name and reputation brings with it.

At the heart of the film, which Tan co-wrote with Screen International critic Jonathan Romney, is a man who has lost his memory after a violent assault. The character, know just as MP for Missing Person, presents a real acting challenge, since without the grounding anchor of memories he is rarely the same person from scene to scene. Irish actor Mark O’Halloran (Adam & Paul) is absorbed into each new identity while also providing the audience with enough consistency to act as a through-line to help us negotiate the fluid, fragmented narrative.

MP remembers nothing after the head injury. “You probably told me this before,” he says to the stranger who is introduced as his wife, “but do we have children?” The home he shares with her has kitchen utensils arranged like a still life. It’s a pristine, airless space. The failure of their marriage plays out in a perceptive scene in which she guides him through their increasingly glum holiday snaps. MP rejects this life. He wanders out to buy a paper, and just keeps on walking.

The journey is both a search for self-discovery and a voyage through a Europe which is, in its way, as unpredictable and unknowable as the film’s elusive protagonist. Tan uses archive material – shots of austerity protests; the wreckage of the Costa Concordia; boarded up shops and abandoned building sites – to paint a picture of the ‘rolling catastrophe’ of the 21st century West. She also inserts snippets of real life interviews in which people muse on their fears, hopes and what they would take to the future. The device is not as jarring as you might expect, slotting in unexpectedly comfortably to the film’s box within a box within a memory box structure.

Although O’Halloran is the constant presence in the film, there are other notable cameo appearances. Manjinder Virk (The Arbor), Hristos Passalis (Dogtooth) and Anne Consigny are particularly fine, and Denis Lavant, playing a blind lottery ticket salesman, combines a scene-stealing comic turn with a lecture on the symbolic resonance of his disability.