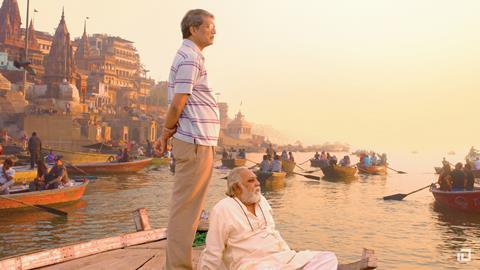 After a prophetic dream, 77 year-old Daya (Lalit Behl) decides that his time has come and that he wants to travel to the sacred ghats of Varanasi in order to achieve salvation when he dies. His browbeaten son Rajiv (Adil Hussain) accompanies his father, and while Daya is as difficult and autocratic in (imminent) death as he has been in life, the son and father gradually make their peace in this gentle drama.

The filmmakers make the most of a tiny budget here

The first feature from Indian director Shubhashish Bhutiani follows a Venice Orizzonti prize-winning short, Kush (2013), and was developed through the Biennale College Cinema project. The film’s appeal is, like an arthouse take on the Best Exotic Marigold Hotel, that it treats aging and death with sympathy and dignity, shot through with eccentric humour. The challenge to marketing might be the fact that, dealing as it does with the winding down of a life, the pace is necessarily slow and the momentum flags in the second half of the picture. Festival prospects should be rosy, and modest theatrical returns are a possibility.

Like an-Indian set interpretation of the same themes as Alexander Payne’s Nebraska, this film essentially deals with a father and son belatedly coming to know each other. At first, Rajiv is too busy and consumed by the pressure of his work to fully focus on his father. During a family sit-down, when Daya announces his plan to donate a cow and then make the final pilgrimage to Varanasi, Rajiv unconsciously fiddles with his watch throughout. The ticking of a clock is a repeated motif for Rajiv’s (many) moments of stress.

There are a couple of eloquent shots early in the film. Rajiv and his wife argue, on either side of an emphatically divided frame; also nice is Daya’s stillness at the centre of the shot after he has ritually donated his calf, meanwhile his family scurry around the edge of the frame, eager to get on with their lives.

The backdrop to most of the film is the eponymous hotel, an institution that houses elderly people at the end of their lives. The film goes a little overboard on the quirkiness here – Daya and Rajiv are greeted by a sadhu clutching a trident and a man in pants exercising with clubs. Daya settles in immediately, joining the rest of the residents in the evening ritual of watching a hokey television series called Flying Saucer and forming a friendship with widow and longterm resident Vimla (Navnindra Behl).

This last is one of the most successful elements of the film – Behl is a wry delight as Vimla. When Daya seems to be about to pass away, she kneels by his bed as he imperiously reclines, surrounded by mourners and musicians, and interprets his muttered commands. “What did he say?” asks the lead musician. “He asks that you sing in tune please,” she says sweetly.

The filmmakers make the most of a tiny budget here: the teaming drama of the city outside is contrasted with the enforced intimacy of the cramped quarters in the very rudimentary hotel (“Mice are a problem,” deadpans Vimla, almost drowned out by the skittering feet of rodent hordes.) The interiors are shot with a soft, gauzy light which takes the edge off the sense of imminent death. Less successful is the score, which feels a little too on the nose at times, cueing in moments of pathos and humour with a forcefulness which is at odds with the understated approach of the rest of the film.

Hotel Salvation premiered at Venice, where it won the annual Prix Enrico Fulchignoni, an award given by the International Council of Film and Television at Unesco to the Venice film that best represents the values of peace and human rights.