'I Do Not Care If We Go Down In History As Barbarians': Karlovy Vary Review

Radu Jude follows up ’Aferim!’ with another powerful satirical critique of his homeland 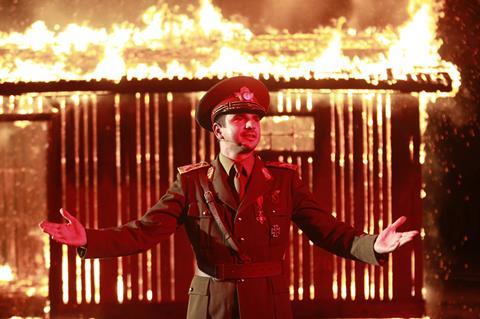 Radu Jude’s satirical critiques of his country have been situated both in the present (The Unhappiest Girl in the World) and the past (Aferim!), while marking the fact that some unfortunate traits never go away. His latest is a dazzlingly dialectical and daring comedy/drama that skilfully brings past and present together and again challenges Jude’s compatriots to face up to the more unsavoury aspects of their history.

As Jude showed in Aferim! he’s unafraid to mine the comedy in horror

Premiering in Competition in Karlovy Vary, the film concerns a modern-day re-enactment of the Odessa massacre, the Romanian army’s slaughter of Jews and gypsies on the Eastern Front in the Second World War. A complex treatment of a mostly unfamiliar historical event may limit commercial potential, though prizes beckon and festivals will no doubt be lining up to receive it.

Following some bombastic archive newsreel praising Romania’s liberation of Odessa from the “Red Terror” in 1941, Jude’s lead actress Ioana Iocob introduces herself – straight to camera – in a breezily Brechtian moment in which she signals that race, ethnicity and religion will be integral to what follows.

Iocob then invites the audience to “enjoy the film,” before peeling off into her character, Mariana Marin, a director who is preparing a large-scale, open-air public performance, commissioned by the city council. Her brief appears to be a celebration of the Romanian victory on the Eastern Front; but she has other plans – to re-enact the massacre that followed the Odessa siege, the tip of the iceberg of the Romanian Holocaust.

And the villain of her “political and educative endeavour” is no Russian, but the source of the film’s pompously evil title: Ion Antonescu, the Romanian prime minister who presided over the genocide.

Her task is not going to be easy. As Mariana gets embroiled with rebellious extras – who rile at what they perceive to be her anti-Romanian sentiments – and the local bureaucrat, Movilă (Alexandru Dabija), who is charged with keeping her on message, she becomes ever more embattled and impassioned.

To Mariana, every challenge is answered with political and philosophical debate, as she references Marx, Wittgenstein, innumerable historians and, in particular, Hannah Arendt, the German-born philosopher who spoke so poignantly of the German Holocaust. At times she reads out cherished texts at length, again breaking the fourth wall and enriching the film with ideas. Similarly, her verbal jousts with Movilă – an intelligent, witty and not unsympathetic adversary – lend a dialectical weight to proceedings.

Lest that sound too heavy – and the film’s agenda is deadly serious – Jude is extremely adept at sweetening the pill. As Mariana quotes Marx’s famous adage that history repeats itself, “first as tragedy, then as farce,” she could be asserting an essential understanding in Jude’s cinema. As he showed in Aferim! he’s unafraid to mine the comedy in horror.

Here, he mixes it up with mouth-watering dexterity. When Mariana instructs one of her older extras, “Show me how you’d die if someone set you on fire,” it leads to an array of over-the-top death throes; insisting that she wants authenticity, one wryly counters, “Like Ceausescu’s wife at the trial.” A cast member will decline to shout “Heil Hitler” because he fears laryngitis. Others dance with their rifles to Boney M. Imploring Mariana to simply stage “something nice to please the rabble,” Movilă outrageously reminds her that with Schindler’s List Spielberg won a hatful of Oscars for showing a single German saving Jews.

Played with engaging vim and intelligence by Iocob, an experienced theatre actress in her first leading film role, Mariana will not be budged from her course. And there are moments in which Jude quietly underlines why: a photograph of a hanging, over which the camera lingers for an age; another still, of people lying dead in a city street; a silent film of a wartime execution and mass grave, playing as Mariana has a needless discussion about sound effects.

And then there’s Mariana’s show itself, filmed with a rough immediacy, and Jude’s acknowledgement of his own uphill battle – his fictional crowd greeting the slaughter with selfies and smiles.