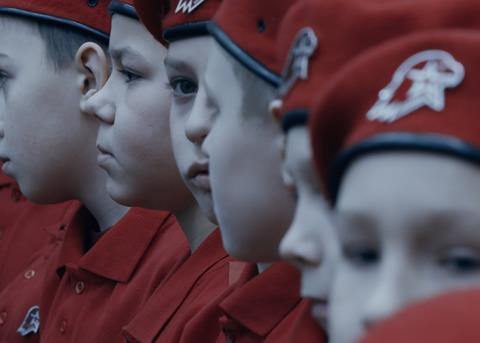 This striking documentary is a multi-layered portrait of a heavy industry churning out components for a machine. But the machine is Russia and the components are the model citizens who are shaped and moulded from an early age. The setting is the ice-bound north-western reaches of the country, an area first populated by gulags intended to facilitate the industrialisation of the Arctic region. But, we are told on a title card (the only piece of context in this largely fly-on -the-wall film), when the prison gates finally opened following the death of Stalin, the people doggedly stayed on.

Okhapkina’s film, which won the Grand Prize for Best Documentary at Karlovy Vary, is an oblique and sometimes almost abstract look at the forces that carve out the kind of inhabitants who can survive this unforgiving life. There is a kinship with the brutal poetry of Liang Zhao’s Behemoth; like that film, Immortal should find an appreciative audience in fans of the more experimental fringes of factual filmmaking on the festival circuit. It is feature length – just – but the brief running time could hinder the chances of a theatrical releases.

Okhapkina weaves together footage of a town which seems to be mired in the perpetual darkness of winter. Shrouded figures blend into the night, and Okhapkina’s use of silhouetting means that many of these figures remain faceless and anonymous. Not so the children who are drilled into shape in ballet classes and military cadet schemes. The camera scans faces which smile in relief when an instructor picks on someone else; catches expressions of mortified shame when their dance steps are deemed inadequate. Homophobic banter is casual and there’s one particularly revealing moment when an instructor enquires into the nationalities of his class. “Any imports here? No? Good boys.”

The sound design emphasises the industrial nature of the way the youth of the community are hammered into shape: the clattering heels of dancers drifts into the next shot, of a thundering train toiling through the icy lands.

The training of dancers and of uniformed kids uncertainly clutching rifles is all preparation for Fatherland Heroes Day. This is something which is at the core of national identity or at least it should be: one teacher makes the entire class do press ups when they get the date wrong. Teenagers in quilted fatigues shift uneasily as an officer lectures them on the heroes of Russia who earned immortality from dying for their country. The camera catches the fidgeting fingers and wide eyes as they watch footage depicting one such fatal leap to ’immortality’.

The production line of citizens moves on, as inexorably as the buses which haul the workers through the frosted air. And the film ends with a shot of the very newest additions – a room full of babies, stacked together in cots, looking like the raw material to be chewed up and spat out by this human factory.