'In The Shadows': Busan Review 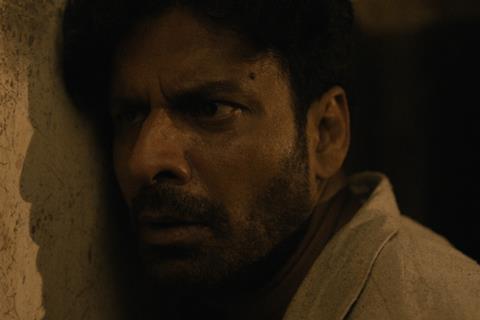 The lure of a labyrinth is twofold. While conquering its twists and turns remains the ultimate aim, enjoying the journey proves just as important. In setting his debut feature within Old Dehli, using its walled-in confines to explore life’s many physical and metaphorical mazes, and following a protagonist trying piece together a puzzle while wandering the streets, writer/director Dipesh Jain aims to channel that experience. Alas, while the film boasts ample ambition, it paves much too easy a path.

Premiering at Busan, In The Shadows is less a crafty psychological thriller and more an emotional voyage towards an end that’s signposted too early to have the desired impact. Accordingly, further festival play may be modest, though there’s still enough to like about the feature: an earnestly fraying performance by Gangs of Wasseypur’s Manoj Bajpayee as well as a mature turn by first-timer Om Singh; the lived-in grit of its claustrophobic locale, as captured with clarity and purpose; and an astute awareness of the haunting nature of the past among them.

An awkward, lonely outcast who spies on his neighbours through secretly installed cameras, Bajpayee’s disheveled Khuddoos is already ostensibly living in a maze, even if he doesn’t realise it. With days spent roving his eyes over his bank of television screens and receiving visits from Ganeshi (Ranvir Shorey), his only friend, his routine is mundane. A hardly heartfelt reunion with the brother he hasn’t seen in 23 years does little to change his malaise, but overhearing a young boy’s pain through his walls has an unexpectedly galvanising effect. He’s soon obsessed with helping, and yet he can’t find the child in question — or, much to his dismay, locate any footage of him from his surveillance network.

Working with editor Chris Witt, Jain intertwines Khuddoos’ quest with the boy’s tale, jumping between the two at obvious junctures. The child, Idris (Singh) — or Idu to his friends and family — dotes on his pregnant mother Saira (Shahana Goswami) and baby brother, roams around with his pal Ginny (Arbaaz Khan), and attempts to avoid his stern, sometimes violent father Liakat (Neeraj Kabi, last seen playing Gandhi in Viceroy’s House). It’s the sounds of a beating that sparks Khuddoos into action, and starts Idu dreaming of an escape. The former is frenzied, losing track of time as he scours his neighbourhood; the latter calm, but filling with anger. Nevertheless, both remain determined in their respective ways.

Thanks to the convincing efforts of Bajpayee and Singh, In the Shadows works best when it strides into the characters’ inner darkness with confidence and commitment, rather than when it’s laying down clues about its ultimate end game. Each actor sells not only the pain driving their protagonists, but the struggle that comes with rallying against accepted standards of masculinity. Idu is horrified by his father’s adultery as much as his temper,  while Khuddoos is constantly verbally denigrated by the bulk of men in the community — crucial inclusions in Jain’s narrative, adding yet another web for the central duo to navigate.

Lensing the film’s vast yet closed-in location, cinematographer Kai Miedendorp ensures that every nook and cranny seems familiar yet unique, evoking the requisite sense of restriction but losing none of Old Delhi’s on-the-ground texture. Unsurprisingly, handheld camerawork proves a pivotal tool in the feature’s arsenal, imparting both urgency and intimacy in winding alleys and tiny apartments alike.