‘Into The Ice’: CPH:DOX Review

CPH:DOX opens with an overwhelming experience of glaciology and climate change in Greenland 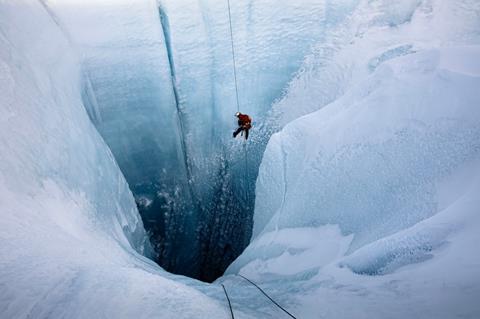 “The Greenland inland ice harbours a secret. You can see our future in it.” This spectacular documentary from Lars Henrik Ostenfeld reports from the sharp edge of glaciology and climate science, following three pioneering researchers whose work on the treacherous ice of Greenland provides invaluable data which should shape the world’s response to climate change. The savage drama of Ostenfeld’s footage – of lashing storms, vast indifferent white expanses and cavernous vertical shafts or “moulins” – is matched by a forceful narration. The film succeeds in making the science accessible, giving a lay perspective on just why the actions of a few hardy souls on an inhospitable glacier matter to the rest of the planet.

The opening film of CPH:DOX, Into The Ice is an overwhelming big screen event which should enjoy further festival slots (it is scheduled to show at Visions du Réel). The National Geographic-friendly combination of adventure, exploration and climate-based timeliness should make it a good fit for either specialist documentary distributors or a streaming platform.

The three scientists that Ostenfeld accompanies onto the glacier are Jason Box, who does yoga on the frozen surface and is studying the extent to which increased snowfall is mitigating the loss of the ice; eminent professor Dorthe Dahl-Jensen, who collects polystyrene boxes full of ancient ice to learn about climate change throughout the past 100,000 years; and Alan Hubbard, the daredevil of glaciology, who dangles on a rope in a 175-metre-deep shaft, as the ice groans and shifts above him and icicles javelin past his ears. “It’s a big fucking hole,” he yells, his words swallowed up by the cold, black nothingness which surrounds him.

On the face of it, Box’s research is the most low key. He and colleague Masashi Niwano trek for 12 days, taking readings to gauge the year’s snowfall and eating packet ramen in their tents at night. But during the time that Ostenfeld is shadowing them, a storm blows up and the men are forced to wield ice saws in the arctic blast to build a wall of ice blocks to protect their tents. And it is through Box’s experiences that the great personal risks of this kind of research are brought sharply and tragically into focus.

Dahl-Jensen’s operation is well-funded “big science”; her research has been crucial for the calculations on which the Paris Agreement is based. The most cinematic venture, however, is that of Hubbard. It is not just that it is visually spectacular. There is also the element of the sound: the ominous disquieting rumbles from deep below the surface which are every bit as intimidating as the vertiginous plunging drops that Hubbard, his safety specialist and wing man Claus Kongsgaard and Ostenfeld plan to lower themselves into. It is something that Ostenfeld does not find easy. “Having fun?” The irrepressible Hubbard is chipper, despite the chunks of ice that whistle past. Behind the camera, Ostenfeld’s voice is slightly strangled-sounding and fear is throbbing through every hard-won frame of the footage, “I think so. I can’t talk”.

But while the crevasse-dangling derring do provides the hook for the film, the deeper theme is more sobering. Ostenfeld pays tribute to the researchers who have voluntarily shouldered what Box describes as “The burden of awareness – the opposite of ignorance is bliss.” And while the film’s final message is familiar, it has arguably never been more crucial: “We must listen to the scientists, those who tell us that there is no time for hesitation.”