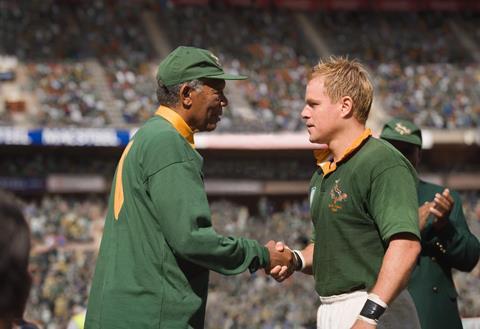 An old-fashioned crowd-pleaser which is both a rousing sports movie and a testament to the nobility of Nelson Mandela, Invictus is another strong entry in Clint Eastwood’s fast-growing body of work. Boasting a finely controlled central performance from Morgan Freeman as Mandela, the film details how South Africa’s first black president used the 1995 Rugby World Cup to unite the black and white populations in his country.

The final 40 minutes detail the bone-crunching action of the match with heart-thumping manipulation…a section which will move the hardest of audience members.

South African stories have failed to perform at the box office of late (Catch a Fire, Country of my Skull), but Invictus benefits from the Eastwood stamp, the clout of Warner Bros as a studio distributor and two big stars – Freeman and Matt Damon (who is the focus of the key art for the film). The sports component might be a problem in a rugby-phobic nation like the US but it will be an added benefit in bringing out international audiences, especially younger men who recall the upset of South Africa beating New Zealand in the dramatic final.

If the film might appear self-important or didactic going in, that would be to underestimate Eastwood’s skill at using humour and humanity to take any hot air out of his own sails. Nelson Mandela is portrayed not as a saintly figure but as a smart operator, a playful, warm man with his own longings and shortcomings. He even defies his own cabinet and supporters by urging them to support the Springboks, the country’s predominantly white rugby team whose green and gold colours have acted as a taunt to the oppressed black population for decades.

Mandela, newly sworn in as president, believes that forgiveness is key to the country’s progress; he rejects proposals to change the name of the team from Springboks and befriends its captain Francois Pienaar (Damon), encouraging the side to coach young black kids around the country as a PR exercise to help sport heal the rifts of apartheid.

Although the team has been performing badly, he rallies them to up their game for the upcoming World Cup and they begin an unlikely winning spree that takes them all the way to the final. But, once there, they must face the “unbeatable” New Zealand side the All Blacks and their formidable star player Jonah Lomu.

Eastwood ambles into the story at a leisurely pace, introducing Mandela’s divided security team – half black and half white – led by Jason Tshabalala (Tony Kgoroge) and his personal staff (including Adjoa Andoh as Brenda Mazibuko, his chief of staff) who are all bemused at their leader’s interest in the white sport of rugby union. Eastwood also subtly weaves in a few moving moments referring to Mandela’s 27 years in captivity.

The final 40 minutes leave any such subtlety behind, however, detailing the bone-crunching action of the match with heart-thumping manipulation. It’s a brilliantly shot and cut section which will move the hardest of audience members.

The film is not the best-looking of the year, and some of the interior scenes are unnecessarily murky. Eastwood also goes overboard with the music - some score by Kyle Eastwood and Michael Stevens, some songs by South African group Overtone - although the combination of the national anthem followed by the World Cup song World In Union help stir up the emotions effectively in the finale.

Anthony Peckham, based on the book Playing The Enemy by John Carlin