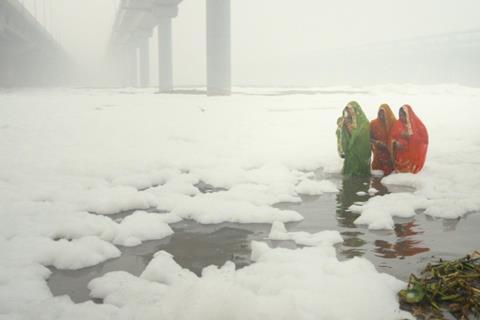 The terrible, incalculable environmental cost of India’s burgeoning economy is the subject of Rahul Jain’s powerful follow-up to his debut documentary, Machines. The two films share a thematic kinship – Machines also scrutinised industrialisation, looking at the impact on unregulated labour conditions – but with its use of narration and contextualisation, Invisible Demons is a more direct, less experimental piece of factual filmmaking. It’s eye-opening and rather depressing stuff, but while it stops short of being a rallying call to arms, the film delivers a stark message about the unsustainability of this kind of untrammeled ’progress’ in India.

While Jain’s debut Machines is an obvious comparison, there’s also, in the striking, savage beauty of the photography, an affinity with Liang Zhao’s Behemoth, which observed the way that China’s heavy industry devoured and destroyed the land. Like Machines, Invisible Demons should enjoy a healthy festival run, particularly in events with either a documentary or an environmental focus. And also in the same way as Machines, it may connect with further audiences through a limited release.

Jain, who appears in the film and provides it with a sparse narration, describes himself as an “air conditioned child”. He was born in 1991, the same year that India opened its economy to the free market – a decision, the film suggests, which set in motion the deterioration of New Delhi’s air and water quality which now sees the city regularly top the list of the world’s most polluted.

Jain’s position is one of privilege – if aircon is one of the markers of social status, he’s definitely one of the haves rather than the have nots. But the film’s focus is on those who find themselves at the sharp edge of the environmental disaster which is enveloping the country: the poor whose homes have no running water supply, who must set aside time every day to fill barrels; the homeless who suffer permanent respiratory damage from inhaling the airborne particulates that Jain describes as “poison darts piercing lungs”.

His interviews are not with the experts but with the ordinary people – the rickshaw drivers, the farmers and truck drivers – whose attitudes to the changes in the world around them tend to be grimly fatalistic. But with temperatures topping 50 degrees centigrade in New Delhi, with smogs reducing visibility to a matter of metres, with rivers topped with thick yellow-tinged bergs of foaming chemical pollutant and with monsoons either absent or descending like a tidal wave which floods two thirds of the country, one interviewee comments that “Even the Gods have changed.”

The drone shot pull-back is an overused device but here it’s more than justified by a shot of a man picking through trash in a landfill, which gradually reveals him to be a tiny figure on a towering mountain of trash which dwarfs the city below. Equally potent are arresting shots of women in brightly coloured saris, immersing themselves in sickly scum-covered river water, while a smog partially obscures the shuddering motorway overpass above.

With its relentless cumulative visual horrors and pointed mentions of asteroids wiping out life on earth and nature resetting, it could be argued that the film’s attitude to India’s environmental catastrophe is no less fatalistic than that of its interviewees. But, such is the scale of the problem, a picture which offered up neat solutions would be disingenuous in its approach. Jain’s film can be best viewed as an effective weapon in the ongoing battle to force India’s government to act to arrest further damage to the country and its people.