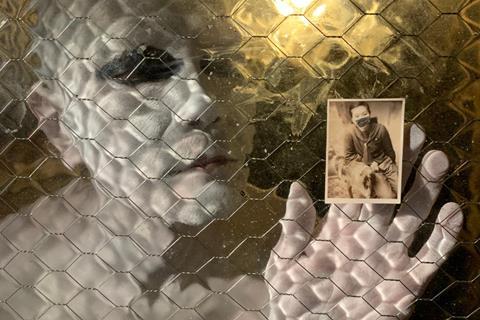 There can be no doubt about the sincerity, integrity or artistic seriousness of Irradiated, a cri de coeur for an age of conflict by Cambodian-born film-maker Rithy Panh. A committed chronicler of the depredations of war, not least in his own country – in films such as S21: The Khmer Rouge Killing Machine and The Missing Picture — Panh has often experimented with documentary form to yield new insights into difficult topics. In this respect Irradiated may be his most ambitious work yet; a three-screen panorama of the horrors of modern war, drawn largely from archive sources, mostly black-and-white, accompanied by a poetic voice-over text and by stark music.

Until a coda which offers pictures of regrowth, hope and natural renewal, the cascade of footage offers little modulation or respite

Containing some horrific and deeply troubling material, the film should not be approached as a conventional documentary, but as a sort of audio-visual oratorio of atrocity. It is a hard film to ignore, but also a hard one to watch, and it is impossible to escape the view that, even for the most committed viewers, the relentlessness of Panh’s approach may be self-defeating, bombarding our sensibilities with – if such a military term isn’t inappropriate here – imagistic overkill. The work’s distinctive form could make it natural for gallery and installation settings as much as conventional film venues, but this is likely to be a controversial work that will thrive on the festival circuit.

The title Irradiated refers ostensibly to the effects of the atomic bomb, although it is suggested that, in the modern age, we have all become contaminated by the effects of war. The film plays out in Scope across a screen divided into three, in a manner reminiscent of Abel Gance’s silent era epic Napoleon and, more recently, of multi-screen gallery films like those of John Akomfrah. Sometimes a single image will stretch across the entire screen, sometimes one image will play simultaneously in triplicate. They are mostly archive black and white images, mapping out a history of war in the twentieth century, from World War One, through the Holocaust, to destruction in Africa, Asia and elsewhere, including images of work camps in Cambodia.

Much of the imagery is harrowing, with graphic images of near-dead survivors and mountains of corpses from concentration camps, and the mutilated of Hiroshima and Nagasaki, together with images of bombed, burned and deserted cities from around the globe. Marc Marder’s spare, inventive score plays against sombre, lucidly poetic French voice-over, delivered with severe authority by André Wilms and Rebecca Marder. The words cast a sobering philosophical light on what we’re seeing and on the necessity of, as the text puts it, looking, and looking again, at these intolerable images, “to experience and understand the different forms of evil.”

Panh’s project works very effectively in that respect – for some of the time. But for many viewers, there may come a point long before the end when we begin to experience fatigue at the relentless, indeed pitiless visual bombardment. Until a coda which offers pictures of regrowth, hope and natural renewal, the cascade of footage offers little modulation or respite. It’s notable that when the soundtrack does briefly go completely silent, it is to accompany some of the grimmest footage of all.

Also problematic is some of the new material that Panh has created, which doesn’t quite feel integrated with the whole: opening close-ups of an artist’s fingers creating model houses (echoing the memorable use of dolls in The Missing Picture), and images of ghostly figures with white faces and black eyes. These latter scenes, featuring traditional Japanese butoh dancer Bion, do sometimes have a powerful symbolic impact, notably a moment in which he appears to tear off his skin; but at their least successful, they feel intrusive, even bathetic, and superfluous as a complement to the already appalling reality of the archive material.

Irradiated very much echoes an eminent French cinematic tradition of approaching the problems of modernity – shades of Godard’s and Chris Marker’s essay films, as well as Alain Resnais, excerpts of whose Night and Fog are used. In that sense, Irradiated also serves as a tribute to the late documentarist Marceline Loridan-Ivens, herself a survivor of the camps. In the coda, she is seen and heard in a sequence from Jean Rouch’s Chronicle of a Summer, hitting a note of intimacy that comes as a merciful relief at the end of a film that can otherwise feel overwhelming to the point of brutality.