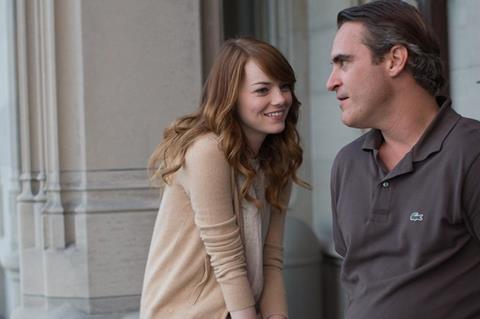 Woody Allen comes out with all guns blazing on his modestly appointed but fiercely intellectual thriller Irrational Man – though the one-liners mouthed by Joaquin Phoenix’s initially nihilistic philosophy professor are unusually grim. Astutely guided by Allen, who clocks up his 45th feature as a writer-director, Phoenix and co-star Emma Stone, playing a college student smitten with the Byronic prof, excel as a more dangerously entwined couple than Stone and Colin Firth in Allen’s frothy 2014 comedy Magic in the Moonlight. They’re shrewdly supported by Parker Posey, whose sexually frustrated, tousle-haired campus wife is a benign version of Martha in Who’s Afraid of Virginia Woolf?

Irrational Man heads to one of the most startling pieces of action Allen has ever filmed, hinting at where he stands now as a moralist or cynic in a corrupt world.

Positive word-of-mouth from Cannes, where Irrational Man premieres Out of Competition , could give it a boost before its July 17 US release, though its satirical philosobabble won’t appeal to mainstream audiences. Sony Pictures Classics will be cautious about its capacity to match Moonlight’s $32.3 million worldwide, let alone Blue Jasmine”s $97.5 million.

That said, this third leg of what might be termed Allen’s “Dostoevsky Trilogy” is lighter than the bleak Crimes and Misdemeanors (1989) and the aloof Match Point (2005). Like the earlier two films, Irrational Man pivots on a murder committed by an update of the character of Crime and Punishment’s Rodion Raskolnikov and traces the effect on him of this defining existential choice.

Another influence was Underground Man, the protagonist of Dostoevsky’s 1864 Notes From Underground. Allen projects the novella’s self-hating emotional cripple – a social victim incapable of taking meaningful action – onto Phoenix’s Abe Lucas, a listless new faculty member at leafy Braylin College in Rhode Island. Abe has derived no satisfaction from writing philosophy books or doing humanitarian work in global hotspots (or from sleeping with female students). (He conjures the disillusioned pastor played by Gunnar Björnstrand in Ingmar Bergman’s Winter Light, an Allen favourite).

His mother’s rumored suicide and the war-zone killing of his best friend indicate why Abe has succumbed to ennui and alcohol. Allen meanwhile takes sardonic delight in the supposed irrationality of women - making the inert, depressive newcomer a fantasy object for two sexy huntresses, Posey’s Cougarish Rita Richards and Stone’s Jill Pollard, the passionate but naive daughter of Braylin music teachers. Rita quickly (and fruitlessly) seduces him, but he rebuffs Jill, insisting they maintain a platonic friendship. Her sincere boyfriend Roy (Jamie Blackley) becomes increasingly irritated by her obsessive chatter about him.

Things change when Abe and Jill eavesdrop on an anguished woman who wishes dead the supposedly-biased judge in her children’s custody case. Abe suddenly discovers his inner moral relativist, deciding to help the distraught mother and serve society by offing the judge, his lack of motive making it the perfect crime. His planning and perpetration of the murder rejuvenate him. He fleetingly becomes the “caveman” lover in Rita’s bed but soon deserts her for the inevitable romance with the persistent Jill.

Otherwise tightly structured, Irrational Man sags in its middle act as Jill speculates about whether Abe is the murderer. She turns sleuth – Stone winningly emerging as the film’s conscience and jittery “Woody Allen” persona – but her detecting verbally reiterates information about the crimes already disclosed visually. However, twinned voiceover narrations spoken retrospectively by Abe and Jill cleverly conceal the outcome. Since Allen allowed Landau’s and Rhys-Meyers’s Raskolnikov figures to get away with murder, there’s no telling what will happen as Irrational Man heads to one of the most startling pieces of action he’s ever filmed. It hints where he stands now as a moralist or cynic in a corrupt world.

Typically, Allen has subordinated style to story on Irrational Man, but it doesn’t lack for pictorial interest. Working for the fifth time with Allen, cinematographer Dharius Khondji gave some shots a noir-ish wash – as when Rita, sitting in a rain-lashed car at night, tearfully tells her husband she’s leaving him. The Ramsey Lewis Trio’s The ‘In’ Crowd dominates the light jazz soundtrack, its breeziness and background nightclub hubbub mocking the infernal events unfolding onscreen.