It's A Wonderful Afterlife 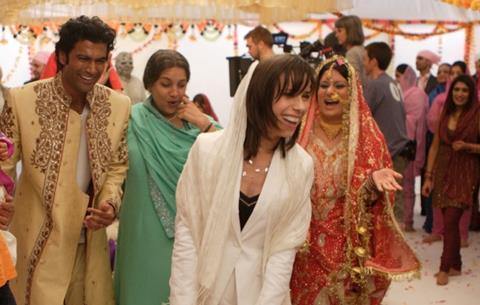 It’s a Wonderful Afterlifeis a saucy London-set vaudeville romp about an Indian widow who is determined to commit suicide, but only after her dowdy daughter marries. Anyone who thwarts her ambitions finds themselves on the wrong side of Southall’s deadly curry killer.

The cast is as broad as the humor, with curry as this era’s stage banana peel.

Gurinder Chadha’s burlesque farce should find its best audience in the UK, and throughout India, although the US, where its raucous, physical Ealing-style comedy may be an acquired taste, could be a tougher sell despite Chadha’s Bend It Like Beckham credentials.

Soon Murthy runs into family friends Roopi and her mother, the recently-widowed Mrs. Sethi (Shabana Azmi), who concocts poisons at her kitchen table. Shadowing the deadly cook are spirits of her victims that only she can see. The grey-powdered ghosts wear their deaths like saintly mediaeval attributes and comment like a Greek chorus on the tempest brewing.

The cast is as broad as the humor, with curry as this era’s stage banana peel. The police are another slapstick ensemble, targeting the wrong people and slipping on whatever food piles up underfoot.

The script salutes everyone from Capra to Ealing classics, Robert Altman’s Brewster McCloud, and the whole zombie-spoof genre. Chadha’s directing approach is warmhearted chaos. Characters collide with each other as food flies through the story, culminating in  - what else? – a wedding, where the spirits settle scores in a spoof of Carrie with paroxysms of anything edible.

Shabana Azmi will please her many fans as the mother who delays her threatened suicide until she snares the right son-in-law, whatever it may take. Goldy Notay, who ballooned up to play Roopi, is equally game in this twist on a chubby girl’s love dilemma.

As Murthy, Sendhil Ramamurthy sticks to type as the film’s straight man, the Prince Charming of East London, as does Sally Hawkins as a New Age goofball indulging her Indian soul with shameless hamming.

This sauce-spattered romance is like your local restaurant’s curry – nothing new or too adventurous, but a predictable dish made from the all the usual ingredients that will satisfy the regular customers.