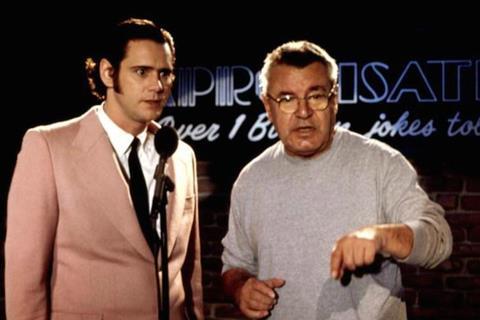 One of the most remarkable scenes in this compelling meta-cinematic documentary comes when Jim Carrey is sitting in his trailer, being made up as Andy Kaufmann, the edgy US comedian he played in Milos Forman’s 1999 biopic Man On The Moon. Carrey is in character, as he was constantly on set (and, as his driver testifies here, on the way to and from the studio lot as well). Gerry Becker, who plays Kaufman’s father Stanley, comes into the trailer, and somehow a father-son argument kicks off which ends up with Becker (or his character?) stalking off. The make-up woman, meanwhile, has been reduced to tears, sobbing about how the row reminds her of her own father.

That sequence is lifted, like many others in Chris Smith’s first full-length documentary since Collapse (2009), from making-of footage shot on the Man On The Moon set in 1999 and purportedly stored at Carrey’s office ever since. An introductory caption tells us this much, and a later hint of a legal challenge by Universal to the release of the footage – shot on set by Lynne Margulies, Kaufman’s former girlfriend, and his writing partner Bob Zmuda – is a plausible enough explanation for its long time in storage.

But there are reasons for caution given that this a film about performance and authenticity produced by Spike Jonze, who reportedly (caution again!) spent around a year discussing the project with Carrey before bringing the director on board. The latest release from media group Vice’s new Vice Documentary division, Jim & Andy has a good claim to theatrical prospects beyond its obvious small-screen, VOD and auxiliary appeal.

What marks Jim & Andy out from a limp post-modern film like the Casey Affleck/Joaquin Phoenix jape I’m Still Here, is that it makes for powerful and stimulating viewing whether or not a game is being played with viewers. Certainly, in a present-day interview about the filming of Man On The Moon which is mixed with the making-of footage and archive material, an intense, bushy-bearded, leather-jacketed Carrey seems for real as he muses in a melancholy, philosophical key about the events of that crazy shoot and their effect on his psyche.

The core of Smith’s film is Carrey’s uncanny on-set reincarnation of Kaufman and the latter’s alter ego, the aggressive two-bit lounge singer Tony Clifton. In some priceless, sometimes hilarious, occasionally disturbing footage, we observe an ironic but still often vexed Forman struggling to deal with the comedian’s refusal to come out of one or the other character on-set; Danny De Vito and other cast members are also visibly tested by Carrey’s attention-grabbing tactics.

The Canadian-born comic actor’s method madness escalates and spirals when professional wrestler Jerry ‘The King’ Lawler arrives on set to play himself. Lawler’s famous bout with Kaufman that resulted in the latter having to wear a neckbrace after the pro performed a piledriver on him is restaged by Carrey. If the making-of footage is to be believed, Carrey (as Kaufman) goads Lawler in the ring, determined to get the wrestler to ignore the studio insurance clause and do a number on him rather than on the stunt stand-in. Sure enough, Carrey ends up on a stretcher himself, and Lawler sure looks angry enough – but is this all ‘Kayfabe’, a term used by pro wrestlers to refer to the fakery behind their staged bouts and personas?

Whatever its methods, the ideas and issues generated by Jim & Andy are never phoney. Using TV, movie and live-performance archive material as well as family home movies, Smith deftly tells both Kaufman and Carrey’s stories while recounting one of history’s weirder movie shoots and charting a chilled present-day Carrey’s memories and meditations on the events of 18 years past.

What emerges is a double portrait of two men whose compulsion to lose themselves in other characters is both an addiction and a variety of creative autism. Carrey talks to an unseen interviewer - presumably Smith - about “going into a fugue state” when he takes on another persona. He tells of a phone conversation with Forman, who rang him at home late at night “just to talk to Jim”. He confides, creepily, about a cathartic hour-long in-character chat with Kaufman’s daughter, who was given up for adoption and never met her father. He also recounts an anecdote about a meeting with director Michel Gondry, who had just cast him in Eternal Sunshine of the Spotless Mind, when shooting still a year away. “You’re so beautiful”, Gondry tells Carrey. “You’re so broken. Please don’t get well”.

“That’s how fucked-up this business is”, Carrey sighs. Arguably more interesting than the film that generated it, Jim & Andy ranks alongside Lost in La Mancha as a gem salvaged from a wreck.