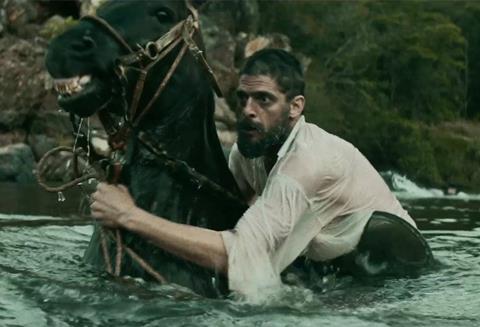 Portuguese director Marcelo Gomes uses a Brazilian separatist martyr of the 18th century as the vehicle for a sweaty, dusty, corporeal walk through the iniquities of colonial rule in the landlocked gold-rush region of Minas Gerais.

Details like story development and character motivation take a backseat to the more static pleasures of landscape, costume and carpentry

There’s a refreshing honesty in Joaquim’s attempts to get under the skin of an unschooled, lice-infested revolutionary who was singled out for execution, it is suggested, because he was the only man of the people in a conspiracy led by liberal-leaning intellectuals, priests and landowners. But Gomes’ admirable cinematic imagining of what a beleaguered second lieutenant’s life must have been like in a godforsaken outpost of a mineral-rich Brazilian province in the 1780s engulfs the film: details like story development and character motivation take a backseat to the more static pleasures of landscape, costume and carpentry.

It’s an issue that culminates in Joaquim’s unresolved ending - it feels like we’re only halfway through act two of this rebel soldier’s conversion to the cause of liberty when the titles start rolling. Such frustrations will put a brake on the film’s international distribution prospects, though Latin American audiences will perhaps respond more warmly to this alternative biopic of an important precursor of El Libertador, Simon Bolivar.

Independence activist Joaquim José da Silvia Xavier, known more commonly by his nickname Tiradentes or ‘tooth-puller’ (from his sideline as a rough-and-ready dentist), was arrested by Portuguese authorities in 1789 before a planned revolt could take place. Gomes’s opening shot is of his severed head on a stake, accompanied by Joaquim’s drawling voice-over description of his fate: the martyr of a failed revolution, he has since become a Brazilian national hero and excuse for a public holiday.

Played with gusto by Julio Machado as a long-haired soldier whose animal energy finds one of many outlets in his sexual dalliance with a proud female slave he calls Blackie (Isabél Zuaa), Joaquim is stationed in a fly-blown military outpost whose main purpose is to apprehend gold smugglers, at a time when colonial revenues from the plundering of Brazil’s mineral wealth were in decline. Resentful of his lowly second lieutenant rank, he’s hungry for promotion – but also bitterly aware that he lacks the social status that would smooth the way.

After Blackie goes on the run, Joaquim is sent on a mission to a remote district, charged with finding further deposits of gold and precious stones for an insatiable royal treasury back in Lisbon. Commanded by a dandyfied superior fresh out of Portugal, Joaquim’s five-man expeditionary force also includes his personal slave, Joao, a native guide, and a mulatto inferior officer – a rather too obvious focus-group sample of the exploiters, the exploited, and those (like Joaquim) who had yet to take sides.

It’s in this back-country episode that Gomes, whose first two features were road movies, seems most at home – there’s no other explanation, apart from stunning landscapes, to spin out a segment that fully inhabits a time and place but does so little to explain the hero’s conversion from colonial footsoldier to equal rights campaigner. For the latter, we’re forced to make do with a book on the American War of Independence given to Joaquim by a member of the Minas Gerais intellectual elite, and a brief reunion with Blackie – who has now become Zua, the leader of a slave revolt.

Joaquim’s naive ideas of the nascent United States as some sort of democratic paradise raised a laugh at the film’s Berlin press screening. But while it may have things to say about the way Brazil’s contemporary inequalities are rooted in history, the message is buried beneath a wealth of detail. We learn more about gold-panning, piranhas and artisanal dentistry here, than we do about what led Tiradentes to the gallows.