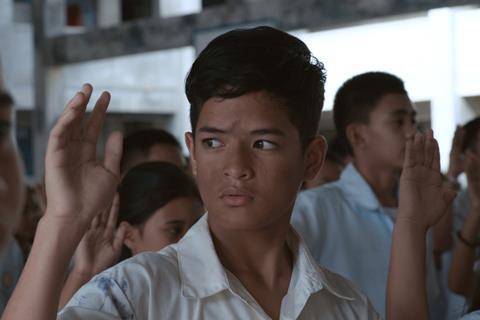 In the social media age there is no such thing as a private moment. Arden Rod Condez’s accomplished debut feature John Denver Trending offers a cautionary tale of cyberbullying in which the video of a teenage boy’s intemperate actions goes viral. The escalating consequences work as both an involving melodrama and a possible educational resource. The winner of Best Film, Best Actor and other awards at the 2019 Cinemalaya, the feature should continue to journey around the festival circuit following its Busan premiere.

Condez brings a great sense of forward momentum to his storytelling

Condez is an experienced writer for Philippines televison. His first feature is inspired by “actual events” and builds a carefully structured story around a central figure who remains sympathetic throughout all the accusations levelled at him. John Denver Cabungcal (Jansen Magpusao) is a 14 year-old pupil at Sta. Ines Catholic High School in the Antique province of the Philippines. He is first seen among a group of boys rehearsing their choreography for a routine to be performed before the whole school. Still smarting from one act of humiliation, he reacts angrily to accusations that he has stolen another pupil’s i-Pad. He vigorously denies the theft, but is so incensed that eventually he attacks his accuser. The moment is filmed by a fellow pupil and then posted on Facebook. A private mistake becomes public property.

Condez brings a great sense of forward momentum to his storytelling. The camera always seems to snaking along corridors, drone shots dive into the countryside where John Denver lives with his mother and family, buses and tuk tuks roam through busy city streets. He constantly underlines a sense of events taking on a life of their own or something that cannot be stopped in its tracks.

He also teases out the tensions between traditional and modern. The rural communities in the film are places where superstition is rife. Setting fire to a tyre is suggested as one means of warding off evil. At the same time, the whole area is closely connected through Facebook and news travels fast.

John Denver continues to plead his innocence as the whole world seems to turn against him. The school headmaster and local police are called in to investigate’ moral outrage is vented on social media as he is judged and condemned by people he has never met. There are echoes of the Salem witch hunts in the collective hysteria that catches fire. It may be a much more connected world in the 21st century, but human nature still has a tendency to bay for blood.

John Denver’s mother Marites (Meryll Soriano) remains steadfast in her support. She never doubts and always defends. As the attack becomes national news, we learn more of John Denver’s past misbehaviour and also some of the family history thus deepening our understanding of the boy’s life and what might be motivating him.

As the story darkens towards the fatalistic, we are immersed in easy outrage, fake news and doctored footage that makes one teenager’s plight chime with events in the wider world. The defiance in Soriano’s mother and the anguish of Jansen Magpusao’s demonised, ostracised teenager lend real heartache to a film that speaks to a generation who live by social media.