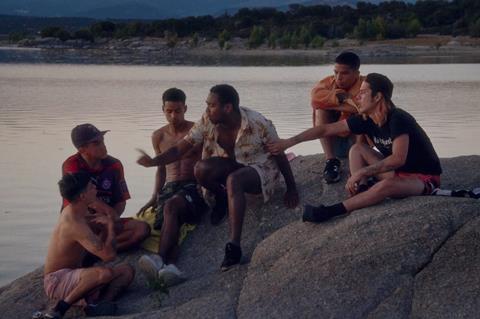 The lives of a group of young immigrants in the outskirts of Madrid is presented with a refreshing directness in Nacho A. Villar and Luis Rojo’s debut La Mala Familia. Balanced on the tightrope between fiction and documentary, and entirely shorn of empty moralising or manipulative compassion, it plunges the viewer into a world that’s entirely the protagonists’ own; the result is a compelling and understated film that’s part critique of an uncaring justice system, part fly-on-the-wall study of its victims. Its unflinching gaze has so far taken it to the Seville and to Rotterdam’s Official Section, with further festival screenings likely.

Part critique of an uncaring justice system, part a fly-on-the-wall study of its victims

Most of the boys here are Latin Americans who have known each other – off screen, too – since they were children. The main focus falls on Andres, whose story is based on that of a real-life friend of the director. The opening scene features the gang at night as they run from the police following an unnamed misdemeanour, one of many meaningful ellipses that mark the directorial style.

We then cut to a courtroom in Madrid where a carefully framed, extended single shot focuses on the boys’ young faces whilst at the same time showing the Spanish judicial system as a bunch of robes and uniforms and a monotonous voice mechanically reciting questions. This is the boys’ perception of the system too; the problem is that the verdict – imprisonment, unless they’re able to come up with their share of a €60,000 fine – will map out their lives for the foreseeable future.

The film is laid out in several discreet, compact narrative blocks and employs a range of styles. The next one fast-forwards us a few years into the future. It features rapid-edit video clips from the boys’ phones as they prepare for Andres’ weekend release from jail. It presents an overview in miniature of their lives as zero-contract truck drivers, construction workers, and in Sebas’ more successful case, as a trainee dentist. (None of the actors are professionals, the stories are true, and all the clips are of real life.)

But most of the film’s duration is devoted to the barbecue they have on the banks of a reservoir on the outskirts of Madrid. Inevitably, this potentially joyful escape from the impositions (and the heat) of the city is punctuated by darkness: on the one hand, the film’s centrepiece, a moving, superbly-delivered ten-minute monologue by Andres as he reads out an unsent letter from prison to his friends, and on the other a lakeside debate between Andres and Jamel about the financial conditions of the judge’s verdict from years before, which now threatens to divide them. How, Jamel wonders, are you supposed to make the money to pay a fine, when you’ve once again been dumped in a jail?

With a couple of tweaks, La Mala Familia could have been an intense, tightly plotted drama. But that doesn’t interest the directors, who instead opt to record the gang’s real-time conversations, which feel only lightly scripted. Studded with unexpectedly revelatory moments, they add up to a portrait of existence at the margins, in which life itself feels like being imprisoned – in the eyes of society, all of them are presumed guilty, perpetually subject to random police checks, and all live permanently under someone’s disapproving gaze.

One beautifully metaphorical passage tells us that the main function of prison is to teach you to see everything up close and forget about the broader view. But the broader view is something that La Mala Familia itself fails to take. There are no long speeches about injustice, no explicit condemnations of society, just an exploration of the tragic consequences on the lives of these young men, who seem to react to it all with resignation and who often aspire to nothing better. As an indirect social critique, this is all fine. But more questionable is the decision to make not a single reference anywhere to any of the “real” families beyond the “bad family” of the title that the boys have made for themselves. The understandable thematic decision to maintain the focus cleanly and exclusively on the lives of its protagonists is what lends the film much of its power; but ironically, it also undercuts the authenticity on which that power depends.