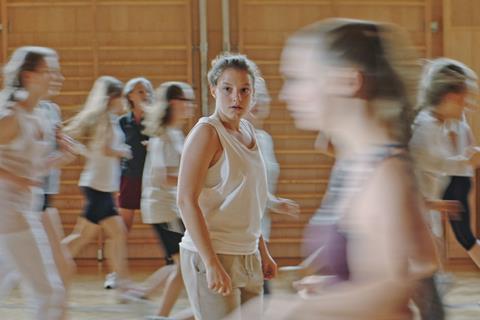 Growing up different in the clannish teen landscape of rural Austria is a struggle. But Mati (Sophie Stockinger) seems to have found her niche. She’s one of the boys, having earned their respect with her fearless attitude on her scrambling motocross bike and her freeness with off-colour jokes. However, as school graduation looms on the horizon, sexual tensions threaten to drive a wedge between Mati and the boys. Meanwhile her parents are grappling with their own tacit secrets. Although hardly breaking new ground, the second feature from Katharina Mueckstein takes an unfussy, clear-eyed approach to gender and sexual politics.

The message, of being bold and true to yourself, is a little on the nose at times

With its lens trained on a young woman who doesn’t comfortably fit into the role assigned to her by society, the film draws immediate comparisons with the work of Celine Sciamma. On the festival circuit, particularly in LGBTQ-themed events and showcases, it will likely appeal to the same audience which responded to Tomboy and Girlhood. However L’ Animale lacks some of the visual impact and the forceful directorial voice which propelled those films into arthouse theatrical distribution.

“I look like a clown.” Sports bra on show under her peach-coloured graduation dress, Mati eyes her reflection like it just stole her beer. Her mother compounds her consternation by muttering something appeasing about showing off her “nice bust.” Mati squirms. The girl we see later is a different creature entirely, straddling her dirt bike and easy in her skin, hair pulled back to show her shorn neck, she bestrides the village social scene with an alpha male swagger. When one of her gang, the dim-witted Kogler, assaults a girl on the dance floor, Mati sides with the boys in the ensuing fracas.

But later, when her buddies are causing trouble once again, she locks eyes with Carla (Julia Franz Richter). The attraction between them is as instant and instinctive as the film’s title suggests. To complicate matters for Mati, her best friend, Sebi (Jack Hofer) wants more than just a platonic relationship, pressing his case with a lurching adolescent botched snog. Mati recoils.

Meanwhile, Mati’s parents circle miserably around the fact of their unhappy marriage. He takes solace in the gay chat rooms; she vents her fury by assaulting the plaster of their permanently unfinished house – one of several overt metaphors.

The message, of being bold and true to yourself, is a little on the nose at times. Mueckstein uses repeated scenes in a German poetry class to track Mati’s gradual realisation that she is going to have to be brave if she wants to live and love in a way that feels true. A scene in which she takes the first baby steps towards coming out to her mother is delicately and empathetically handled. Stockinger peels back the tough girl layers of protection to reveal a deep well of vulnerability and need.

The film’s most daring device is the use of L’ Animale, an 80s pop ballad by Italian singer songwriter Franco Battiato, which gives the film its title. Not only is the swelling melodrama of the track rather at odds with the sparse, pulsing electronica of the rest of the score, Mueckstein uses the song as a moment of reflection, her characters singing along with lyrics which reflect their emotional anguish. A final shot, of Mati acing her exams, leaves us with an unequivocal message of hope for the future.