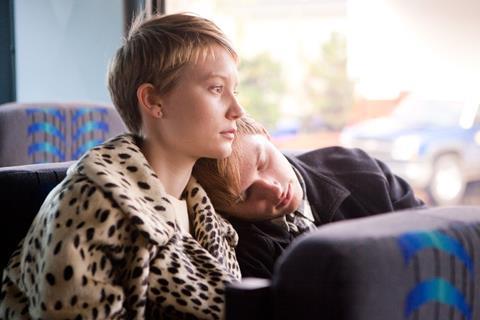 Gus Van Sant’s latest is a delicate teenage love story which overcomes some self-conscious quirks to resonate as a gently moving hymn to life. It’s basically a two-hander and boasts another impressive turn from Australia’s Mia Wasikowska and a promising screen debut from Dennis Hopper’s son Henry Hopper, but its emotional strength derives from Van Sant’s sure hand with actors, story and camera.

Jason Lew’s screenplay generally steers clear of the maudlin, and ends on an upbeat note.

Sony financed the film and has worldwide distribution rights but, for all its pedigree, it’s a small, polished gem more at home in the arthouse than the multiplex. Its photogenic teen stars won’t guarantee teen audiences, but with careful handling, it could develop a following among older teens and upscale adults. The film opened Un Certain Regard and Sony Pictures Classics will release it in North America in September.

The film opens with all the kooks and mannerisms of a Wes Anderson movie. Hopper is a remote young man called Enoch Brae who spends his spare time crashing funerals or playing Battleships with his (imaginary) best friend, the ghost of a Kamikaze fighter pilot called Hiroshi (Kase). Enoch, we discover, lost his parents in a car crash at an early age and has been unable to connect with life since then.

The drama is grounded by the appearance, at a funeral one day, of the beautiful Annabel Cotton (Wasikowska) who, despite initial rebuffs, succeeds in breaking through Enoch’s protective armour. He soon discovers that she has cancer and only has three months to live, but they nevertheless decide to embark on a passionate and caring romance, helping each other onto the next stages of their respective paths.
Jane Adams plays Enoch’s aunt who moved from Seattle to Portland to raise him after his parents’ death, while Schuyler Fisk is Annabel’s older sister.

Jason Lew’s screenplay generally steers clear of the maudlin, and ends on an upbeat note, in spite of the inevitable fate that befalls Annabel. Wasikowska, the busy young actress whose credits include Jane Eyre and Alice In Wonderland, anchors the film with another charismatic performance, heartbreakingly natural as she patiently tackles both illness and Enoch’s foibles. Hopper, who makes his professional acting debut here, is less convincing in a difficult role but has enough presence to hold his own against her.

Set in a wintry Portland, Oregon, Restless has a similar combination of eccentricity, melancholy and profundity to Van Sant’s 20 year-old My Own Private Idaho and, although it’s less memorable than that film, acts as a valuable reminder of the director’s sensitive touch and eclecticism.

Lead producer on the film is actress Bryce Dallas Howard who attended New York University with writer Lew and encouraged him to turn short plays on these characters into a screenplay.