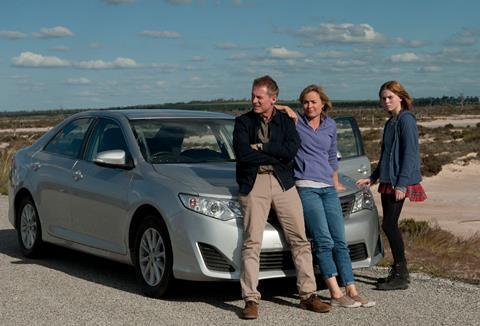 Imagine Picnic at Hanging Rock reimagined in a contemporary Western Australian landscape of scrubby bush, ranches, wide-open skies and dingy truck-stop motels and – well, that’s not Looking for Grace, apart from the fact that both films’ central characters share the same mix of rebellious innocence and burgeoning womanhood. What makes this story of a missing teenage girl different from that outback classic, apart from its flatly current setting, is the way it places its rebellious heroine in the centre of a web of other stories, interlocked in a fashionable multi-layered style in which several characters get to carry the point-of-view baton.

All this stylisation tends to stifle the truth of a small, honest story that could have done with a little more breathing space.

The problem with a choral exercise like this is one of audience engagement, or the lack of it. Here it’s exacerbated by the formalism of Brooks’ directing style, something that affects everything from dialogue delivery to the placing of a teacup. This stiffness is, of course, partly the point about the empty or rudderless lives she’s depicting, those of (mostly) middle-class, middle-income Australians whose little problems are made microscopic by the vast, indifferent landscapes that surround them.

Microscopic, but also more poignant? At times, yes; but the tonal shifts of Brooks’ film, the first the director of Japanese Story has made from her own script, have an annoying way of pulling the rug from under our emotional connection with the characters. At the beginning, we’re in thriller territory as we see two teen girlfriends on a long-distance bus, Grace (the impressive Odessa Young) and Sapphire or Sappho (Pearson), their friendship challenged by the arrival of handsome lone traveller Jamie (Richardson), with whom Grace starts to flirt. When in a roadside motel he loves her and leaves her penniless, with Sappho already headed back home, Grace, too ashamed to seek help, seems on the cusp of becoming the classic horror or dark-drama victim.

At this point we cut from ‘Grace’s Story’ to what another on-screen chapter heading announces as ‘Bruce’s Story’ – the film’s most inconsequential episode, involving a long-distance trucker with his young son in tow. Three more stories will follow: that of Tom (Norris), an elderly private detective, then, in sequence, those of Grace’s parents, her brittle, lost, obsessive-compulsive mother Denise (Mitchell), and her short-tempered, work-stressed father Dan (Roxburgh). All five stories overlap, with the action sometimes kicking off from the point of intersection with the previous character’s tale (as in the truck driver episode), sometimes backtracking so the connection comes later.

What is more intriguing than this trendy script-workshop layering is the way the film begins to shift genre and tone in the Denise section. What Grace is running away from, to (it turns out) a death-metal concert two days’ drive away, is an emptiness so depressingly tragic it’s often bleakly comic. Mum Denise wears perfectly ironed gym outfits, and has the perfectly clean sofa shampooed yet again while Grace’s father, Dan, tries and fails to have an affair with his comely deputy at ‘Pine Palace’, the daggy furniture store he owns and runs, which could have featured in an Aussie remake of Fargo. It’s Tom’s story which is the most refreshingly original: he’s a geriatric private eye who ends up contributing some nice grace notes (as it were) to the film’s over-laboured denouement.

For in the end a series of solid performances (Mitchell is pitch-perfect) and some sensitive character development deliver not a few insights into the messy way real, imperfect people behave in the real, imperfect world. But it’s as if  Brooks wanted every carefully framed and showily lit shot to be Hopper-esque, every costume an expression of character, every line of a script whose dialogue is full of theatrical repetitions (the phrase “I don’t know” being one of the worst offenders) gravid with hidden significance. Like the soundtrack, too jaunty when there’s no visible comedy on the screen, too emotionally pushy when we need a bit of quiet, all this stylisation tends to stifle the truth of a small, honest story that could have done with a little more breathing space.