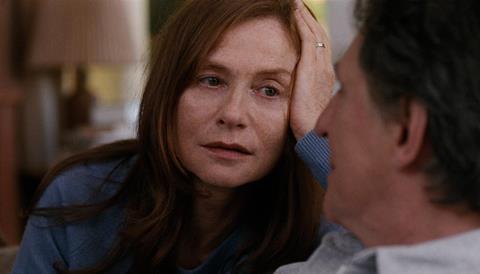 In what can only be described as the smoothest of transitions, Norwegian director Joachim Trier’s English-language debut finds him in top form, completely at ease with the language and fluently using to great effect the same subtle approach and lively visual grammar perfected in his two earlier films, Reprise and Oslo, August 31st. This story of the husband and two sons of a celebrated war photographer who try to find a common ground three years after her death in a traffic accident is richly detailed, sensitively played and cleverly mounted.

Isabelle Huppert offers one of her most unselfconscious performances, as the sunburned, weather-beaten photographer who doesn’t mind looking her age.

An upcoming exhibition of the work of war photographer Isabelle Reed (Huppert) re-unites her husband, Gene (Byrne), who sacrificed his career as an actor to become a teacher and work closer to home. His older son, Jonah (Eisenberg) is a teacher working on his Ph.D whose wife has just given birth to their first child.  Then there’s 15-year old Conrad (Druid), a moody, solitary, introverted high school student filled with pent-up anger and mistrust.

To examine the relationships in dysfunctional family, the script moves constantly back and forth in time and includes one or two brief dream sequences. Points of view are frequently switched, voiceovers sometimes complement and sometimes counterpoint the image and so much is bubbling under the surface that it is easy to be distracted by the rich cinematic language and forget what the picture is actually about.

But Trier uses these techniques to capture a much fuller image of each character and their relationships with each other, examining them from different perspectives and allowing the viewer to reach a much richer individual portrait of each individual.

Gene, for instance, is the doting father who desperately wants to communicate now with his sons but may have missed the opportunities he had in the past. He is also the husband who never openly opposed his wife’s dangerous career but never forgave her for it  - he couldn’t live with the frustration of never having her at home and the anguish of knowing she might not return. Isabelle herself, with all her deep affection for her family, can’t help her addiction to her job, disturbed by the ethics of her profession and conscious that her frequent and long absences from home have turned her into an onlooker every time she returns.

The fact that her death may not have been an accident but a suicide is stated early on. The elder son, Jonah, knows about it but has others issues which preoccupy him. Though he should now be a fully responsible adult with a young family of his own, the birth of his child has thrown him out of kilter and he is trying to regain his equilibrium. Conrad is immersed in the dark troubles of adolescence, yearning for a mother he misses and nursing his jaundiced view of the whole world in general and his father in particular, interpreting Gene’s concern as an attempt to curtail his freedom.

It is true that towards the end, the film loses some of its initial impetuous and begins to be preoccupied with finding the best possible solution to wrap up the plot. Still, Conrad’s encounter with the girl he secretly adores and their long walk home through the deserted streets at night is one of the film’s more touching moments.

Writing with Eskil Vogt, just as he did for his first two films, the success of Trier’s deceptively complicated script relies to a great extent on working with the same technical team who have been there since the beginning. They include cinematographer Jakob Ihre and editor Olivier Bugge Coutte who has tied an unusually complicated collection of puzzle pieces into one coherent picture.

The cast deserve full credit. Gabriel Byrne’s father is soulful and sincere but he’s not always the most admirable or determined person. Isabelle Huppert offers one of her most unselfconscious performances, as the sunburned, weather-beaten photographer who doesn’t mind looking her age. Devin Druid carries Conrad with all the rebellious spirit required, and David Strathairn offers a remarkable cameo as Isabelle’s former colleagues about to write a revealing piece about her for The New York Times.