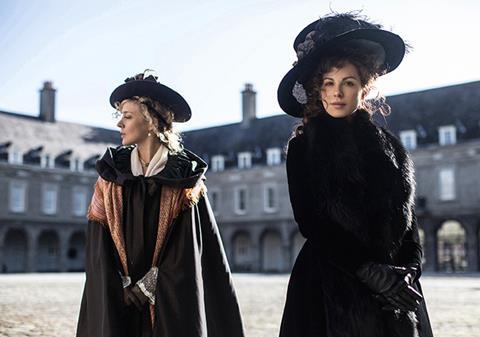 In Whit Stillman’s debut film Metropolitan (1990), the American director told a droll, skillfully scripted tale of love and friendship among a group of young uppity, upper-class Manhattanites that seemed like it could have taken place 200 years before. With Love and Friendship, Stillman’s adaptation of an unpublished 18th century Jane Austen novella, he has done exactly that. Whether debutants in New York City or landed gentry in England, Stillman is perfectly at home, delivering the same dry humor and tender observations about the affairs of the highest echelons of society.

Stillman’s script is filled with sharp wit, much of it deployed superbly straight-faced by Beckinsale’s Lady Susan

For those seeking postmodern irony, look elsewhere: Stillman is ever faithful to the tone and tenor of his source material, producing a refined and very witty comedy of manners that Austenites should be pleased with. But a broad amusement it is not. Just prior to its Sundance premiere, Roadside Attractions announced it would partner with Amazon Studios for a U.S. release before going straight to the streaming platform, where Austen and indie fans are sure to discover it. With winning turns from British actors Kate Beckinsale, Xavier Samuel, and Tom Bennett, among others, European audiences will also be curious to check it out.

With a literary flair, Love and Friendship introduces some of its many ‘dramatis personae’ with a series of portraits, accompanied by defining characteristics written out on screen. For example, there’s “Lady Susan Vernon, a beautiful young widow in straitened circumstances” (Beckinsale), “Mrs. Alicia Johnson, Lady Susan’s friend; an American Loyalist exile, from Hartford in the Connecticut” (Chloe Sevigny); and “Sir James Martin, wealthy young suitor of Frederica Vernon & Maria Manwaring, a bit of a ‘Rattle’” (Bennett), and so on.

It’s a lot of information and characters to sort out in a short amount of time. And the quickly spoken period dialogue—and blink-and-you’ll-miss-it asides and put-downs—are initially a challenge to catch. But once the always scheming, delightfully arrogant Lady Susan’s machinations take shape and audiences get used to the film’s rhythms, Love and Friendship becomes a charming and relatable look at romantic entanglements.

The love triangulations are many: Lady Susan wants to marry off her daughter Federica to Sir James, a daft wealthy suitor (Bennett); at the same time, Lady Susan is seducing Reginald DeCourcy, her sister-in-law’s young brother (Samuel), while Federica also has a crush on the handsome gentlemen. Meanwhile, Lady Susan has another suitor in her sights, Lord Manwaring, described simply as “a divinely attractive man.”

One of the chief pleasures of Love and Friendship is seeing how these different triangles become varying and unsuspectingly altered pairs. There’s also the desire to see the Machiavellian Lady Susan, who is pulling everyone’s strings in order to achieve her own goals, receive her due comeuppance, which also doesn’t come off as expected.

Stillman’s script is filled with sharp wit, much of it deployed superbly straight-faced by Beckinsale’s Lady Susan. A few gems include remarks such as “facts are horrid things” and chastising her friend for marrying a man who is “too old to be governable and too young to die.” Lady Susan is a Queen Bee and the meanest of mean girls, but a joy to watch because of it. Chloe Sevigny is less assured as her American confidante with a bustier, who merely functions to hear out Lady Susan’s many schemes.

Another highlight is Bennett (to be seen in Christopher Guest’s upcoming Mascots), whose gleefully awkward blockhead enlivens the stiffness of the proceedings. Because his speech patterns are halting and repetitive, as opposed to the crisp smoothness of everyone around him, he is a welcome presence, puncturing holes in thisglossy, varnished world. His opening monologue about the difference between “Churchill” and “Church Hill” is hilarious. Later, while examining a plate of peas at the dinner table, he cries effusively, “What are these green round balls?”

Stillman keeps the camera and blocking here as restrained and repressed as the clipped emotional states on display. There is not an ounce of flourish to the filmmaking, but that’s always been the director’s aesthetic. His embellishments come in subtler forms, with witty dialogue and memorable characters—traits that Love and Friendship offers in abundance.