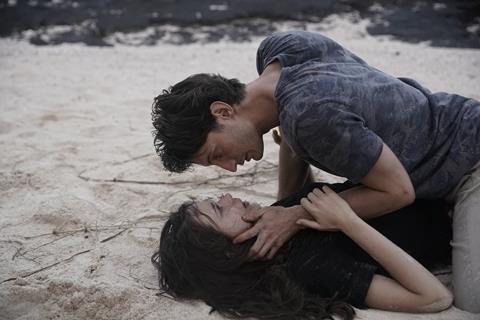 That any number of French films over the years could easily have been titled Lovers says a lot about the uninspired nature of Nicole Garcia’s bloodless drama. Actor turned director Garcia enjoys much respect in France, although her filmography is hit and miss, running from the stolid Emmanuel Carrère adaptation The Adversary to her last film, 2016’s flamboyantly emotive From The Land Of The Moon. Her latest is a lugubrious essay in lifestyle melodrama, and outside France, where the prestige of the main names involved will command some audience loyalty, Lovers is unlikely to ignite much passion.

A quintessentially bourgeois bagatelle that, even if you don’t believe that cinema has to be urgently of the moment, feels irredeemably dated and listless.

Told in three chapters, the story begins in Paris. Soldier’s daughter Lisa (Stacy Martin) is studying at catering school, while sharing a moodily shadow-draped flat with boyfriend Simon (Pierre Niney), who makes a living selling heroin to wealthy customers. When one of his clients dies of an overdose, the young couple plan to escape together – but Simon leaves Lisa behind. We then meet her again several years later, at a luxury hotel in Mauritius. She’s now married to an older man, insurance fat cat Léo Redler (Benoît Magimel), whom she’s met while staffing the cloakroom in a Champs-Elysées nightclub, and they’re on the island hoping to find a child to adopt.

In one of the two wildly implausible coincidences that fuel the narrative, guess who should turn up working at the hotel? With Léo off on a trip, it’s not long before Simon and Lisa are back entangling their skinny bodies, as they do most decorously throughout the film. The couple then continue to rekindle their affair in Geneva, where the Redlers live in pampered luxury. But it’s not long before Léo’s suspicions are stirred.

Handsomely shot by Christophe Beaucarne – with a tendency to moody desaturated colour - and designed with severe luxury by Thierry Flamand, Lovers is otherwise flat - a gloomy, emotionally deadened affair, with the three leads offering oddly affectless performances. This is presumably a directorial decision intended as contrast to maximise the dramatic intensity. But it doesn’t pay off, not least because the elegantly etiolated duo of Niney and Martin don’t have the emotional heft to make us care about their characters (indeed, much of the time, the lovers drift through dramatic situations with languorous blankness). Magimel is somewhat more muscular in his presence, albeit playing the very conventional figure of a moneyed alpha male; the actor is now, incidentally, acquiring a physical bulk that gives his screen presence something of the looming physicality of a Depardieu or a Gabin.

Preoccupied as it is with surface glamour – which includes the lowlife chic of the couple’s cohabitation early on – the film may hypothetically have some intent to comment on the corrupting lure of wealth and Western capitalism. But the Mauritius episode feels like pure cinematic tourism, and throughout the film, non-white characters (including Lisa’s Asian housekeeper and a black gun seller who is reduced to a background blur of soft focus) are sidelined to extent of barely existing. Glossily glum, the film could almost be offered as a prime exhibit of how – yes, the phrase is irresistible – white privilege still rules a certain sector of European cinema. Lovers is a quintessentially bourgeois bagatelle that, even if you don’t believe that cinema has to be urgently of the moment, feels irredeemably dated and listless.