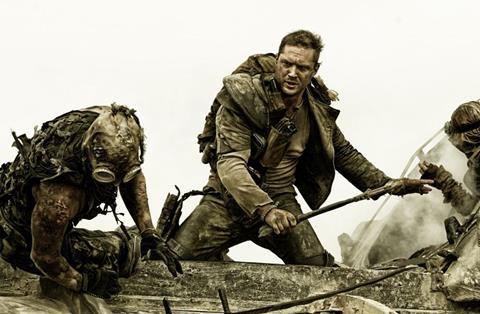 The chase is on — and on and on — in Mad Max: Fury Road, a bulldozer action movie that’s relentless, thrilling, exhausting and numbing in equal measure. Character drama and emotional investment take a backseat to orgiastic car chases, as director George Miller (returning to his franchise for the first time in 30 years) pours his heart and soul into some truly visionary and gonzo sequences of vehicular carnage. Consequently, Fury Road is perhaps best appreciated as an objet d’art: as a kinetic, oddly distancing whirlygig that pummels you into awed submission.

Playing out of competition in Cannes, Fury Road will open across most of the globe by May 15. Starring Tom Hardy and Charlize Theron — movie stars, to be sure, but not exactly box-office dynamos — this Warner Bros. release should cater to hard-core action buffs and those smitten with the original trilogy, which starred Mel Gibson. To be sure, Fury Road’s more-is-more approach should translate to considerable dollars around the world, but the one mystery is whether the film’s dark, unyielding tone will scare off some viewers, cutting into commercial prospects.

Not really a sequel or reboot, Fury Road is most accurately described as another instalment in the post-apocalyptic chronicles of Max Rockatansky (Hardy), who is tormented by brief, vivid flashbacks of past atrocities which he failed to prevent. Captured by lawless desert raiders called War Boys, Max is carted off to an outpost known as the Citadel, where his uninfected blood will be harvested as fuel for the War Boys, who do the bidding of their merciless, masked ruler, Immortan Joe (Hugh Keays-Byrne).

Max’s fate seems bleak until he reluctantly befriends Imperator Furiosa (Theron), a steely driver who has masterminded a getaway for herself and Joe’s five wives (including Rosie Huntington-Whiteley and Zoë Kravitz). Wanting his wives back, Joe and his minions give chase. Max helps Furiosa fend off these savages as they try to make their way across the desolate Wasteland to the Green Place, an oasis where they’ll be safe.

Miller has directed films since 1985’s Mad Max Beyond Thunderdome, including the two Happy Feet movies, but his return to the franchise he created seems to have spiked his adrenaline. With few exceptions, Fury Road is almost nonstop motion, Max and Furiosa’s perilous journey constantly endangered by Joe’s pursuing gang or by other marauders along the way. Preferring practical effects whenever possible, Miller and cinematographer John Seale have crafted an action movie that’s stupendously physical, blessedly lacking the disheartening weightlessness that mars a lot of CGI-heavy blockbusters. In Fury Road, there’s a palpable sense of danger as actors balance precariously between vehicles, which makes the film’s many superb stunt pieces, overseen by second unit director and stunt coordinator Guy Norris, hum with suspense.

Pretty soon, though, it becomes obvious that Fury Road is a baldly one-dimensional movie, the filmmakers’ energies almost entirely devoted to the elaborate car sequences. The rest of the time seems to have gone into developing the film’s aggressively grisly dystopia milieu via production designer Colin Gibson and costume designer Jenny Beavan.

For a while, Fury Road’s complete disinterest in screenwriting fundamentals feels liberating, as the director keeps upping the ante on this desperate chase through the desert. But what feels liberating at first can become monotonous, and Fury Road starts to drag once the frenetic sameness of Miller’s strategy takes hold. If one utterly bravura action sequence is revelatory, four or five in the exact same style borders on overkill. (Likewise, Junkie XL’s score, which is monstrously propulsive initially, eventually bogs down in blockbuster-film clichés — specifically, the tiresome use of minimalist, deep bass notes, which is reminiscent of Hans Zimmer’s much-parodied booming Inception score.)

In such an overheated atmosphere, emoting isn’t as necessary as presence, and Hardy instils Max with a haunted stoicism. The character isn’t particularly nuanced, so Hardy’s physicality is essential, the actor punching, kicking, running and shooting with calm assurance. Still, Theron gives the more resonant performance, the taciturn Furiosa concealing her anxiety behind a cold expression. Miller and his two co-writers don’t provide their characters meaningful backstories, but we see enough of Furiosa’s buried pain that her determination to protect these women proves grimly heroic.

The supporting cast tends toward types, Nicholas Hoult having a field day playing a simpleton War Boy who becomes sympathetic to Max and Furiosa’s plight. Keays-Byrne (previously seen in Miller’s Mad Max) is hidden behind a mask, so his demented eyes provide the characterisation. As for the wives, they leave little impression, indicative of Fury Road’s nagging limitation: The stakes are always supersized, but we never exactly care that much about the participants in the struggle.