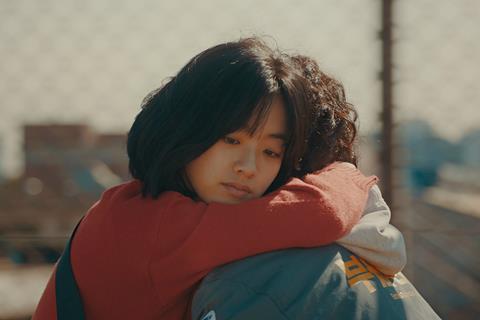 This first feature film uses as its springboard an X-ray photograph of two people caught in the act of having sex, but then spirals out into a story which takes in a talking fish, a relationship breakdown and a series of freak geological events in Seoul. The director is riffing on the idea of how misunderstandings snowball, but, without a solid central idea to anchor the wackiness, the exuberantly nonsensical chaos of this movie is likely to have only niche appeal.

The film is wildly indiscriminate in its approach to storytelling

The film’s spirited naivety and erratic plotting means that if Maggie connects with an audience, it is likely to be a younger one. As such, following on from its world premiere at Busan, the film might be best suited to distribution through VOD platforms. Further festival bookings are not out of the question, but the film is probably too out-there to make much impact on the arthouse circuit. Maggie was supported by Busan’s Asian Cinema Fund.

The episodic story unfolds through a narration and a series of title cards. The Love Of Maria hospital is rocked by scandal after it emerges that two mystery people were caught, in flagrante delicto, by the X-ray machine. The actual mechanics of this – like so much else in the film – are airily glossed over. Nurse Yoon Young (Lee Juyeong) believes, erroneously, that it is she and her boyfriend who feature in the now infamous photograph. She is mortified and plans to resign the following day. However, when she arrives at the hospital, it turns out that everyone except her boss, Dr Lee (Mun Sori) has taken the day off, presumably because they too assume that they feature in the X-ray.

Dr Lee has a crisis of trust when she realises that the entire staff of the hospital is lying to her. But this is swiftly resolved after Yoon Young suggests that they check out the stories of two employees at random. If it turns out that they are telling the truth, the doctor and the nurse swear that they will believe everything everyone says going forward. This resolution is tested when a patient turns up at the hospital claiming that the bullet wound in his stomach was an injury sustained from a freak accident while peeling an apple.

Meanwhile, sinkholes have started to open up all over Seoul, providing employment for people like Sung-wan, Yoon Young’s frizzy-haired wastrel of a boyfriend. These gaping chasms may or may not have something to do with Maggie, the pet catfish of one of the patients in the hospital and, we learn, the narrator of the film.

The film is wildly indiscriminate in its approach to storytelling. Very few scenes – particularly not those featuring Dr Lee and a gorilla – contribute much to the central story, which deals with the trust issues between Yoon Young and her boyfriend, and the eventual breakdown of their relationship.