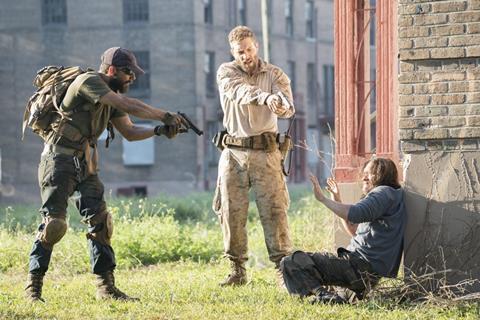 A committed, emotionally charged performance from Shia LaBoeuf is not enough to save Man Down, a heavyhanded, hopelessly sentimental journey through the troubled mind of a traumatised American Marine. A lot of tears are spilled on screen in this heart-on-the-sleeve effort from director Dito Montiel, but it fails to provoke the requisite response in the viewer.  The familiar feel to many of the training and combat scenes, and the fact that this is no American Sniper, will make Man Down a tough sell theatrically. Even the potential talking point of a significant plot twist is unlikely to work in its favour although the talent on both sides of the camera should boost prospects in ancillary markets.

Shia LaBoeuf delivers a completely compelling, fully-rounded performance that is among the actor’s best

The film begins promisingly enough with US Marine Gabriel (LaBoeuf) and his best friend Devin (Jai Courtney) making their way through a vision of some kind of post-apocalyptic America. Colours are bled from the screen to create a monochromatic vision of a bleak future. Rubble-strewn streets, abandoned homes and deserted cities testify to an unspecified catastrophe and the words  “”America We Have A Problem” are prominently scrawled across one wall. Gabriel is feverishly intent on finding his wife Natalie (Kate Mara) and their lost son.

A series of flashbacks establish the macho Gabriel as a devoted family man with the secret code words of ‘Man Down” to declare his love for his eight year-old son Jonathan in a manner that doesn’t embarrass him at the school gate. The number of times “Man Down” is repeated throughout the film could even become a drinking game.

A further series of flashbacks finds him in conversation with Captain Peyton (Gary Oldman) as they discuss “ the incident” during his tour of duty in Afghanistan and try to establish Gabriel’s state of mind and the cause of his barely controlled anger.

Flitting between a potential slice of science-fiction in the manner of Cormac McCarthy to a trite family drama and a predictable war movie just doesn’t gel into a persuasive combination. There is a degree of gimmicky originality in a device that finally reveals how all these pieces fit together and what they mean but everything else falls in the shadow of more familiar films. The suburban bonds between the families of serving marines have a distant echo of The Deerhunter, the scenes of brutal training at the hands of a blustering bully evoke Full Metal Jacket and the combat scene in Afghanistan could come from many a film or television series in recent years.

The performances are fine throughout although Gary Oldman seems under-employed as the poker-faced army interrogator. Shia LaBoeuf carries the emotional weight of the film, making a comfortable fit for the macho marine in the domestic scenes and constantly quivering on the edge of emotional meltdown in the wake of combat trauma and personal betrayal. It is a completely compelling, fully-rounded performance that is among the actor’s best although the quest for gruff authenticity makes some of the mumbled, swallowed dialogue hard to catch.

What works against giving that performance the setting it deserves are the film’s clunking change of gears and a big finale that tugs at the heartstrings in an overblown manner which is all too easy to resist. The music seems designed to smother the film in schmaltz and gives the drama a further push towards the bombastic.