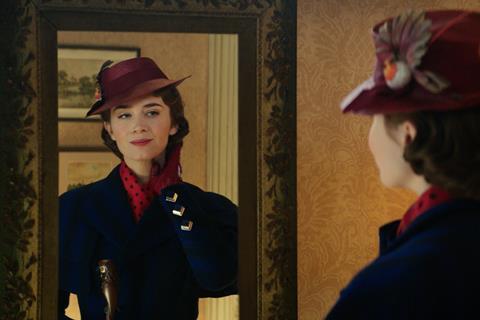 It comes as no surprise to read that the evergreen 1964 classic Mary Poppins was one of the first films Rob Marshall, the driving creative force behind Mary Poppins Returns, saw as a child. This sequel, which he has co-produced, directed, co-written, and co-choreographed, is a lively homage, another “quintessentially English” production interpreted through the misty American eyes of the Walt Disney Picture Company on location and soundstages in London. The good news for cinema-lovers aghast at the very idea of the world’s most famous nanny unfurling her umbrella again is that Marshall’s film is a love letter, a mirror of the first film with all the same enchantment and endearing flaws.

The feeling that we’re cycling back to the cinematic nursery is there from the start.

There’s so much Hollywood lore surrounding Mary Poppins – even an Oscar-nominated movie, 2013’s Saving Mr Banks, about how it was made – that a sequel is intimidating, even though creator PL Travers wrote seven herself. Her magical nanny, a symbol of British pride during the London Olympics in 2012, is such a beloved icon the fear is that Marshall and stars Emily Blunt and Lin-Manuel Miranda might tarnish the memories left by the beloved Julie Andrews and Dick Van Dyke. Fortunately the opposite is true: this is an homage to another time, a honey pot that Paddington has dipped into successfully on two occasions, not to mention Nanny McPhee. To summarise: Mary Poppins Returns is a sparkling tribute act.

The feeling that we’re cycling back to the cinematic nursery is there from the start. In a nod to the past, Marshall bathes the screen in black before presenting his version of Bert, the chimney-sweep. Jack, Bert’s former assistant, is a lamp-lighter (or leerie) performed by Miranda with a Cockney accent that’s only a slight improvement on Van Dyke’s, although he’s just as light on his feet. Everything here is a hall of mirrors: a credit sequence which references the original and the Walt Disney studio’s live-action output, a London which comes from the glass-painted first film yet is sharper in its unreality. Cherry Tree Lane is still there, with Admiral Boom setting off the noonday gun and the Banks children, now grown-up and played by Ben Whishaw and Emily Mortimer.

When, finally, Emily Blunt floats into Julie Andrews’ four-octave shoes as the never-ageing no-nonsense nanny, she blindsides the audience with her warm, mischievous charm, as naughty as a buttered crumpet and just as nice. And what’s an octave or two when you’re having so much fun? The British actress’s  song and dance sequences, each set against the previous film’s interludes (under water, wholly animated, a day at the fair, etc) are a fairground ride you want to take with her, and Marshall has significant expertise in staging them from films including Chicago, which production designer John Myrhe also worked on, and Into The Woods, with that film’s star Meryl Steep back to perform a number here.

The story is soft and simple, a little too much for the running time, in much the same way as the original. It’s the depression (the great slump) and the scatty, recently widowed Michael Banks (Whisaw, the voice of Paddington) is about to lose the family home on Cherry Tree Lane. His sister Jane (Emily Mortimer) helps with his three forlorn children, as does dotty housekeeper Ellen (Julie Walters in full Mrs Overall mode). But the bank, under the management of (vaguely) sinister Mr Wilkins (Colin Firth) will take everything they have if Michael doesn’t find the bonds left to him by his late father on time.

Mary Poppins Returns is precision-engineered for people of Marshall’s age and above, even “younger” audiences who grew up on the Christmas repeats. They’ll be transported back to a magical past, where villains are bank managers who can be defeated by ‘pesky kids’, not short-sellers who bring down the world economy. They’ll bring their children and grand-children and the question here is whether this old-fashioned entertainment has what it takes to charm the Paddington generation, because there’s no cynicism at play in Mary Poppins Returns. This is a big-hearted song and dance spectacle for the entire family in which everyone laughs at the same jokes.

True, this idealised version of England has never existed, but it is so globally attractive it was pilfered by Paddington and now Mary Poppins Returns nicks a few tricks from the marmalade-loving bear in return – namely, a multi-racial cast. Who wouldn’t love this beautifully crafted all-inclusive non-Brexity Britain, where class and racial issues have vanished, Mary Poppins hasn’t aged, Big Ben isn’t under scaffold, and little moppet Georgie Banks (Joel Dawson) makes one of the best musical debuts since Shirley Temple? He turns a tiny song into a tear-jerking experience. And even if that doesn’t get older audiences, two late-film cameos by the greats will demand the hankies get pulled out.

A word about craft. To note that Sandy Powell has outdone herself in the costume department is nothing new, but you want to reach out and touch the “animated” costumes in particular here. Myhre’s extensive design experience has found a perfect home. And, finally, the music and choreography is impressive, taking on the challenge of delivering a new Supercalifragilistic and A Spoon Full of Sugar with conviction, if not brio. It’s a tribute act that wouldn’t be here without the original, yet stands toe-toppingly tall by itself. Mary Poppins would probably advocate being more modest, but Walt Disney himself might insist that the entire team takes a well-deserved bow.

Screenplay: David Magee from a screen story by Magee & Rob Marshall & John DeLuca based upon the Mary Poppins Stories by PL Travers