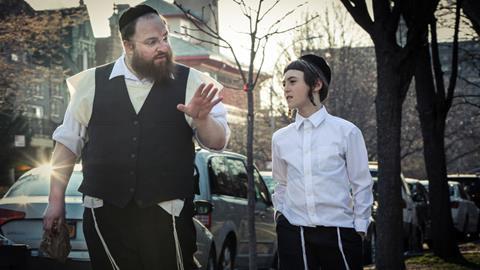 Menashe reminds you that even a God-fearing man can be a loser, although he’s a proud and likeable one. This small film in Yiddish avoids mythology as it eyes and sometimes skewers a closed world in New York City. Menashe will probably be viewed initially as a curiosity, travelling widely in the infinitely expanding world of Jewish film festivals yet it should also play in theaters in North America, Europe and Israel. This bare-boned feature will be a calling card for Joshua Z Weinstein, a cinematographer making his directorial debut.

The mood succeeds thanks to understated performances by Weinstein’s cast of mostly non-professionals, who seem to be working according to a life-script that they know well.

Menashe is about its lead character, named Menashe, a grocery store employee who seems to fail at everything. He’s a single father, and his only son lives with his wife’s family, a mark of shame for the man. It’s hard to decide who likes him less, his former wife’s brother or the owner of the grimy store where he works.

Played by the portly Menashe Lustig, a Hasidic Jew and semi-professional actor, and adapted from events in his own life, Menashe in the film still has his pride, which means that he takes on tasks that he can’t possibly accomplish, whether it’s baking a cake or singing a song. One of those missions is to be married again, a duty for Hasidic men and women, if only for the purpose of bearing more children (which Menashe can’t support). A meeting with a prospective bride turns into belligerent speed-dating. And Menashe’s every encounter with his former brother-in-law is a humiliation where the unfortunate widower cringes with pain.

Joshua W Weinstein, who co-wrote the script in English, has a cameraman’s sensitivity to the details of Menashe’s unruly life, with all its everyday slights. Despite a budget that appears on screen to be as low as Menashe’s meagre salary, Weinstein creates a vivid atmosphere of small battles. In a bittersweet film like this, you wouldn’t call that magical, but you could call it real, as if the Dardennes came to Brooklyn, only funnier.

That mood succeeds thanks to understated performances by Weinstein’s cast of mostly non-professionals, who seem to be working according to a life-script that they know well. In a dusky palette of grays, Weinstein gives us a portrait of a schlemiel (Yiddish for ne’er-do-well and all sorts of other disparagements), yet he does it with a minimum of shtick. Menashe does not pay homage to Fiddler on the Roof or any borscht belt cliches. There’s no wondrous glow, as in Rama Burshtein’s Fill the Void (2012), also set in the Orthodox world. Nor does the film bow too deeply to religious authority. Both God and family turn out to be overrated here.

Instead, Menashe calls to mind Paddy Chayevsky’s sombre Marty (1953), about a lonely Italian-American butcher in the Bronx, and Ushpizin (The Guests, 2004), Gidi Dar’s warm comedy about a born-again Hasidic man who’s visited by crooks from his earlier criminal life.

As in Ushpizin, Weinstein’s cast comes mostly from the ultra-Orthodox community. Purists are sure to quibble about inconsistencies in the spoken Yiddish. Menashe’s young son in the film, played by a secular boy from Israel (Ruben Niborski), speaks differently from the shlumpy father whom he doesn’t resemble. Sadly, there aren’t enough Yiddish speakers in the movie audience for those criticisms to matter. Menashe will be appreciated for what its character gets wrong at every turn, not whether its accent coach got something right.