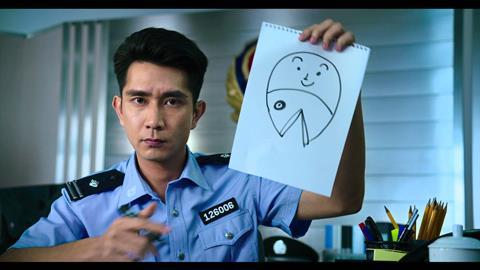 Stephen Chow Sing-chi infuses his latest romantic comedy with a powerful ecological message, as a beautiful young mermaid is tasked with seducing the rich tycoon who is destroying her ocean home. Mermaid also proves a strong vehicle for Chow’s latest ingenue, Jelly Lin, as well as gifting robust roles to Deng Chao and Taiwanese pop star Show Lo. Opening in Hong Kong and China on 8 February - the first day of the Lunar New Year - Mermaid set a new single-day record for a local film at the mainland box office, taking RMB281 million ($42.7 million), and that success looks set to continue in Asian markets thanks to Chow’s enduring popularity there.

Newcomer Jelly Lin brings a delightfully quirky demeanour to her literal fish out of water.

Playboy businessman Lu Xuan (Deng Chao, American Dreams In China) drops large sonar devices into the ocean along a strip of newly acquired coastline, known as the Green Gulf. He plans to clear the marine life and begin reclamation work on the area for a new luxury resort. But his actions endanger a community of mermaids who also live in Green Gulf. Shan (Jelly Lin), a young mermaid familiar with the human world, is sent by Octopus (Show Lo) to lure Lu Xuan back to their lair, where they intend to kill him.

Lu Xuan is perpetually surrounded by beauties only interested in his wealth - not least potential business partner Yue Nan (Zhang Yu Qi). So when he meets the eccentric Shan, her odd behaviour and total disinterest in his money intrigues him. Needless to say, Shan’s deception backfires when she too develops feelings for Lu Xuan, putting her loyalties to the test, while also presenting problems of inter-species relations, what with her being half-fish.

Set on the mainland and filmed in Mandarin as (opposed to the writer-director’s native Cantonese), Mermaid finds plenty of opportunity to imbue proceedings with Chow’s trademark brand of absurdist humour, quite a local specialty. The film opens with an amusing vignette set at a dilapidated museum featuring fake dinosaur relics and its very own “mermaid”. Another standout sequence has Shan and Lu Xuan perform a spirited rendition of the theme song from The Legend of the Condor Heroes while on their first date. Occasionally the humour strays into more unsettling territory, however, such as when Octopus, posing as a sushi chef, is forced to dice and grill his own tentacles to avoid detection.

Mermaid opens with a newsreel montage of rain forests being cleared and crude oil being pumped into the ocean, before introducing Lu Xuan and his cadre of ridiculously wealthy business associates (including director Tsui Hark). Their plan, to destroy a nature reserve and construct a luxury resort, has numerous real-world counterparts in both Hong Kong and China, and if anything, Mermaid is the story of one man’s awakening to Shan’s sentiment that all the money in the world is useless without fresh air and clean water.

Chow has no interest in subtlety but thankfully keeps his environmental concerns within the film’s narrative. Deng Chao is effortlessly loathsome as the rich kid who only knows how to throw money at problems, but his transformation into an activist for change is believable nonetheless. Newcomer Jelly Lin brings a delightfully quirky demeanour to her literal fish out of water. Shan is beautiful, yet unaware of that fact or how to use it to her advantage. Lin also displays a gift for physical comedy, not least in a sequence where her character attempts to attack Lu Xuan using a bag of sea urchins.

Mermaid also marks the first major screen role for Taiwanese pop star Show Lo, who appeared briefly in Chow’s previous film, Journey To The West: Conquering the Demons. Octopus and his errant tentacles provide much of the film’s comic relief, while he is also responsible for spearheading the mermaids’ revenge mission. Though it is never explained why a half-man half-octopus is in cahoots with a community of mermaids, the notion fits perfectly within Chow’s skewed fantasy world.

Zhang Yu Qi, herself a former Chow debutant in CJ7, portrays the film’s real villain, epitomising everything wrong with humanity’s attitude towards the environment.

3D presentation doesn’t add much to Choi Sung Fai’s cinematography, while the occasionally hokey CGI only adds to the film’s oddball charm. Bruce Yu’s production design is notweorthy, particularly the set of the wrecked tanker where the mermaids have made their temporary home. Cameos from the likes of Wen Zhang (Journey To The West: Conquering the Demons) and Kris Wu (Mr. Six) provide solid support, but its the likeable leads that hold our attention.